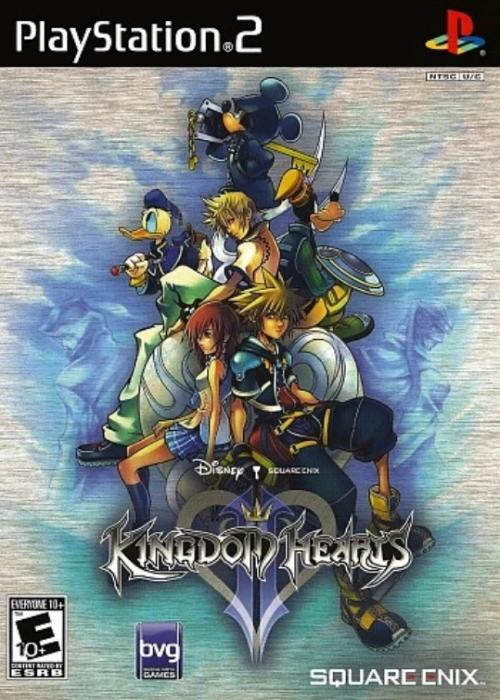 KINGDOM HEARTS II follows Sora, Donald, and Goofy on their continuing quest, after the events of KINGDOM HEARTS. Sora is looking for his lost friend Riku, while Donald and Goofy are searching for their missing king. The story begins in Twilight Town, a quiet burg nestled between night and day. Sora and friends are joined by a vibrant new cast of characters, including the king himself. Together, they will encounter countless dangers in worlds both familiar and brand-new.

The world of KINGDOM HEARTS joins classic Disney characters and worlds together with a new story filled with new characters and environments created in the renowned Square Enix style. The result was one remarkable, innovative, original property that captured the attention of both gamers and critics alike. In KINGDOM HEARTS II, players will travel through the worlds of Beauty and the Beast, The Lion King, Mulan, Pirates of the Caribbean, Steamboat Willie and Tron as well as revisit worlds from the original, including Aladdin, Disney Castle, Hercules, The Little Mermaid, Winnie the Pooh and Tim Burton's The Nightmare Before Christmas. The game features more than 100 Disney characters, and also introduces new, original characters such as Roxas, members of Organization XIII and the Nobodies, all designed by Square Enix's Tetsuya Nomura, director and character designer of the KINGDOM HEARTS series. Nomura is best known for his creations in the top selling titles FINAL FANTASY VII, VIII, X and X-2. New Disney additions to the sequel include Chicken Little and Stitch from Disney's Lilo and Stitch as summons as well as one of Disney's favorite villains, Pete.

KINGDOM HEARTS II features a new and improved real-time battle system which provides an increased selection of commands, such as performing special attacks and cooperative attacks with members of your party, adding strategy to the gameplay. Players can also perform the "Drive" to transform main character Sora into his various forms, altering his skills and abilities. Examples include the Brave Form, where Sora absorbs the power of Goofy allowing him to use two Keyblades; the Wisdom Form, where Sora absorbs the power of Donald allowing him to increase his magic power; and the Master Form, where Sora absorbs the power of both Donald and Goofy and increases both his attack and magic powers. These new features bring additional challenges and excitement to the players and further enhance gameplay.

2. Tales of the Abyss (PlayStation 2)