The Largest selection of New and Preowned Xbox One games!

Check out these Xbox One titles! Terrorize the people of 1950's Earth in the role of the evil alien Crypto-137. Harvest their DNA and bring down the US government! Annihilate puny humans using an assortment of alien weaponry and psychic abilities. Reduce their cities to rubble with your flying saucer in Destroy All Humans! Is something wrong with your Xbox One system, but you don't know what it is? Use our Xbox One Free Diagnostic Service to schedule an appointment!

The Most Popular Xbox One games for Every Gamer!

In the Lands Between, the Elden Ring has been shattered. Demigods claimed the shards of the Elden Ring and the mad taint of their newfound strength triggered a war. Ye dead who yet live, your grace long lost, follow the path to the Lands Between beyond the foggy sea to stand before the Elden Ring, and become the Elden Lord in Elden Ring. Then, discover the secrets behind the world of Earthfall and the cataclysmic alien invasion. Build barriers to keep the invading forces out and use in-game 3D printing technology to create 20 different weapons for defense.

Town of Light, The

Look what Xbox One games just came in!

Coming Soon for Xbox One!

Get the Best Trade-in values for your old games towards Upcoming Xbox One games!

DC League of Super-Pets: The Adventures of Kr... 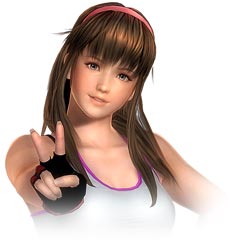 Low Prices Got Even Lower!

Plays on Xbox One 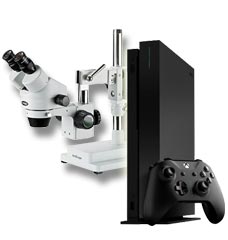 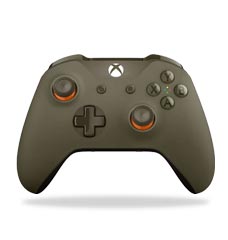 Legacy of the Xbox One

The Xbox One is a home video game console developed by Microsoft. Announced in May 2013, it is the successor to the Xbox 360 and the third console in the Xbox family, and was released in North America, Europe (in some countries), Australia, and Brazil in November 2013, and in Japan, China, and other European countries in September 2014. It is the first Xbox game console to be released in China, specifically in the Shanghai Free-Trade Zone. Microsoft marketed the device as an "all-in-one entertainment system". The Xbox One mainly competes against consoles such as Sony's PlayStation 4 and Nintendo's Wii U as part of the eighth generation of video game consoles.

Moving away from its predecessor's PowerPC-based architecture, the Xbox One marks a shift back to the x86 architecture used in the original Xbox; it features an AMD Accelerated Processing Unit (APU) built around the x86-64 instruction set. The console places an increased emphasis on cloud computing and the integration of entertainment applications and services, offering the ability to overlay live television programming from an existing set-top box or a digital tuner for digital terrestrial television with an enhanced program guide, split-screen multitasking of applications, and improved second-screen support. The console optionally includes a redesigned Kinect sensor, marketed as the "Kinect 2.0", providing improved motion tracking and voice recognition for use in its graphical user interface (GUI) and games. The Xbox One offers the ability for users to record and share "clips" from gameplay or live-stream directly to Twitch, Ustream, and other streaming platforms. The console's controller was redesigned over the Xbox 360's, with a redesigned body, D-pad and triggers capable of delivering directional haptic feedback.

The Xbox One received mostly positive reception for its refined controller design, multimedia features, and voice navigation. Its quieter and cooler design was praised for making the console more reliable than its predecessor on-launch, but the console was generally criticized for running games at a technically lower graphical level than the PlayStation 4. Its original user interface was panned for being nonintuitive, although changes made to it and other aspects of the console's software post-launch received positive reception. Its Kinect received praise for its improved motion-tracking accuracy, its face recognition logins, and its voice commands.

A redesigned model known as Xbox One S was released in August 2016; it has a streamlined design, native support for 4K video playback and upscaling, and HDR10 high-dynamic-range color. It was praised for its smaller size, its on-screen visual improvements, and its lack of an external power supply, but its regressions such as the lack of a native Kinect port were noted. A future hardware revision codenamed "Project Scorpio" is scheduled for late-2017; it will feature major hardware upgrades focused on enabling 4K gameplay and support for virtual reality hardware, and will be backward compatible with all existing Xbox One software and hardware.