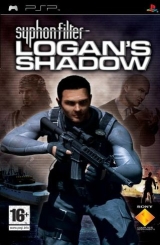 Gabe Logan makes a dramatic return this fall in Syphon Filter: Logan's Shadow exclusively for PSP (PlayStationPortable) handheld entertainment system. This original title created by Sony's Bend Studio is the sequel to the award winning action title, Syphon Filter: Dark Mirror and features all-new combat mechanics, weapons and an engaging storyline that will leave you wondering who to trust.

In an all new story, written by Greg Rucka, author of the Queen and Country series of novels and graphic novels, Syphon Filter: Logan's Shadow provides a sophisticated and gripping storyline that is sure to resonate with comic book lovers and action enthusiasts. We find Gabe Logan once again using a combination of stealth and "run-and-gun" gameplay as he is called into action when a dangerous new technology is hijacked by a criminal extremist group. In a story that takes him from the depths of the Indian Ocean to the deserts of the Middle East, Gabe is faced with the possibility that his long time partner, Lian Xing is a double agent.

Syphon Filter: Logan's Shadow is complete with a variety of combat mechanics including the ability to force enemies into cover with "blind-fire", an advanced melee system that allows Gabe to use enemies as human shields, and 360 degree underwater combat. For the first time in the franchise "interactive moments" have been added for increased player interaction, such as airlifting debris and escaping wrist restraints. Returning to the franchise are buddy missions which have been enhanced with a variety of new objectives.