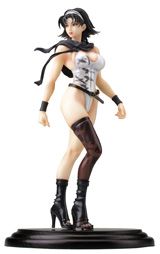 The hit new line of Tekken Tag Tournament 2 Bishoujo Statues continues! With its thrilling martial arts action, the Tekken series of video games from Namco has been a huge hit with players since the original arcade game in 1994. In the games, fighters compete in the King of Iron Fist tournament for control of the Mishima Zaibatsu Corporation, using their unique talents against their opponents. Following after Ling Xiaoyu is the noble fighter and opponent of the devil himself, JUN KAZAMA! First appearing in Tekken 2, Jun is presented in this magnificent Bishoujo Statue based on a new illustration by master Japanese illustrator Shunya Yamashita. 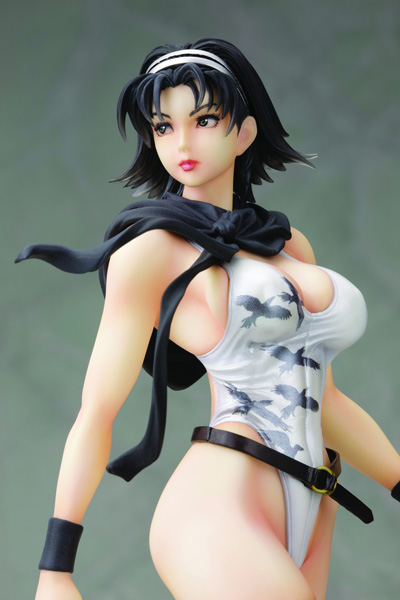 Unlike some of the other more action-oriented Tekken Bishoujo beauties, Jun Kazama strides forth confident and relaxed, yet ready for a fight. The fierce competitor is captured in a very subtle walking pose that looks fantastic, showing off her grace with her head held high and looking at you over her shoulder. Jun wears an interesting outfit consisting of black high-heeled boots, one thigh length stocking, a dynamic white bodysuit, and a short scarf. She accents that ensemble with a thin belt, bracelets, and a hairband, and the intricate bird print on her suit matches that on her stocking. Jun's beauty cannot be contained, from her lithe body to her entrancing Bishoujo inspired face!

Jun Kazama stands over 8 1/2 inches tall (1/7 scale) on a specially designed base. Display the amazing beauty by herself or alongside the other Tekken Bishoujo statues from Kotobukiya!