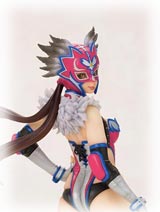 A KOTOBUKIYA Japanese import! The hit new line of Tekken Tag Tournament 2 bishoujo statues continues! With its thrilling martial arts action, the Tekken series of video games from Namco has been a huge hit with players since the original arcade game in 1994. In the games, fighters compete in the King of Iron Fist tournament for control of the Mishima Zaibatsu Corporation, using their unique talents against their opponents.

Next up after Christie, Alisa, and Asuka is the mysterious luchador fighter JAYCEE! Also known as the 'Wandering Fighter,' the masked contestant Julia Chang from Arizona is presented here based on a new interpretation of the character by master Japanese illustrator Shunya Yamashita. With her intricate and unique outfit, Jaycee presents a powerful image as she stands with her back to you, checking you out over her shoulder with a knowing grin. 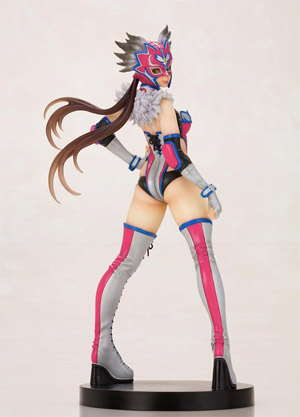 The masked fighter looks great in her mini lingerie-like bodysuit with thigh high boots and long gloves, and the color scheme of pink and white with pale blue highlights only emphasizes her hotness. Jaycee stands on her tip toes, stretching her legs and further emphasizing her amazing physique.

A fringe of feathers surrounds her shoulders while a plumed wrestling-style mask (that still lets her hair flow behind her in two long tendrils) hides her identity in the competition. You can even display her as the mysterious Jaycee or as Julia Chang with an included interchangeable unmasked head! 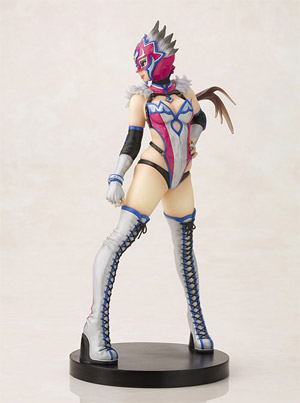 Standing slightly over 8 inches tall (1/7 scale) on a special display base, Jaycee was sculpted by Busujimax (Takaboku Busujima) with special attention to her intricate costume and hair. The masked fighter is a fantastic addition to your Tekken Tag Tournament 2 bishoujo statue collection!