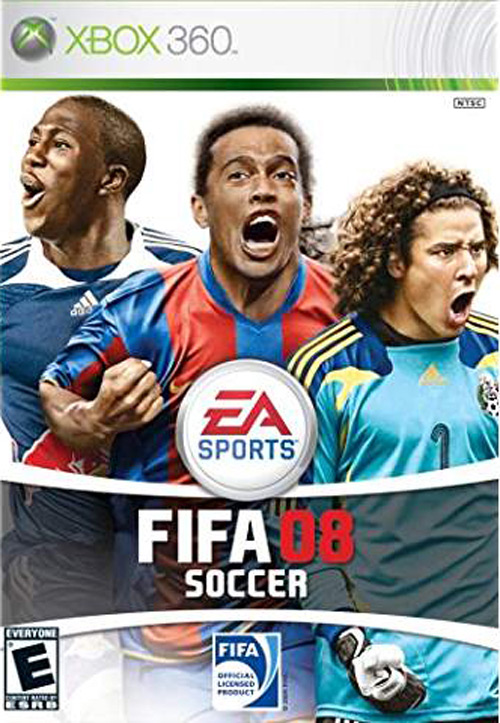 FIFA Soccer 08 challenges players to master the skills required to play like a professional soccer player. Fans around the world can experience the same highs and lows of real-world players and tackle the challenges they face on a daily basis.

The FIFA Soccer 08 next-gen gameplay engine, built to maximize the power of the Xbox 360 video game and entertainment system and the PLAYSTATION 3 computer and entertainment system, delivers animations and ball control that is so responsive you feel like you are actually on the pitch. Players are now aware of their surroundings, reacting authentically to threats and opportunities to make intelligent decisions.

Now with the FIFA Soccer 08 shooting system you can enjoy even more control and precision in front of the goal to become a true marksman.

For the first time ever, fans playing FIFA Soccer 08 will face the pressure to improve their game that real-world players endure every day. A new play mode called Be A Pro locks you in the role of a single player and challenges you to master the same disciplines as a real professional player—from positioning and tackling to reading the field and passing.

FIFA Soccer 08 now gives every football fan the chance to perform pro skills with a true next-generation organic 'building-block' system. You can combine tricks and skill moves together to recreate signature moves from the real-world superstars or define your own style of play. You can even capture video of your best moves and goals in-game and upload to the FIFA 08 website to show off your style and celebrate your glory with friends across the globe.

The award-winning Interactive Leagues debuts on the Xbox 360 and the PLAYSTATION 3 as part of the deepest online feature set to date. Represent your club online against your rivals throughout the season in the F.A. Premier League, Bundesliga, French League or Mexican 1st Division. When they play, you play. Plus, create and organize your own multiplayer Friends Leagues and tournaments with all the tools in-game.

In addition, FIFA Soccer 08 is dramatically more real and exhilarating with the inclusion of 620 licensed teams, 30 official leagues, and more than 15,000 players.