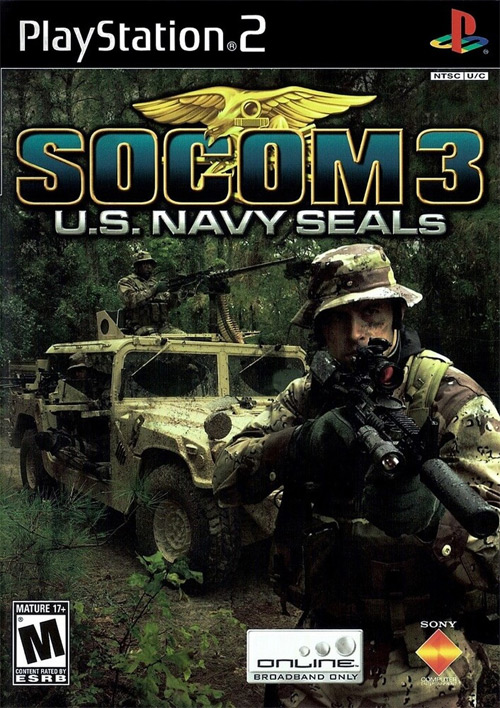 Protect America from enemy forces in urban and rural warfare throughout the world in SOCOM 3: U.S. NAVY SEALs, exclusively for the PlayStation®2 computer entertainment system. SOCOM 3 builds on the strengths of the multimillion-selling franchise to firmly establish both single-player and multiplayer as equally outstanding game experiences. Created in association with the U.S. Naval Warfare, SOCOM 3 is as close as you can get to being a Navy SEAL on PlayStation 2.

Explore three new Areas of Operation (AO): Morocco, Poland, and Bangladesh. Streaming environment technology allows gameplay maps to be five to six times larger than in SOCOM II: U.S. NAVY SEALs. In addition, multiple save points eliminate having to replay a failed mission from the beginning, allowing for seamless progression through the plotline.

For the first time in the SOCOM series, land and water vehicles play a central role in the gameplay experience. Vehicles are drivable by both players and AI and cover a range of military and civilian vehicles including tactical turret-equipped pickups and the SEAL-team configured military Humvee and SOC-R Assault Boat.

The innovative new weapon customization system in SOCOM 3 allows players to use more than 30 different weapons and attachments, resulting in nearly1,000 different weapon combinations. The new Team Command Actions (TCA) allows you to quickly give your teammates context sensitive commands such as move to, breach, and more, simply by pointing at the location and pressing a single button. Combined with more complex team and enemy AI behavior, SOCOM 3 presents a fully immersive and more intense tactical experience than ever before.