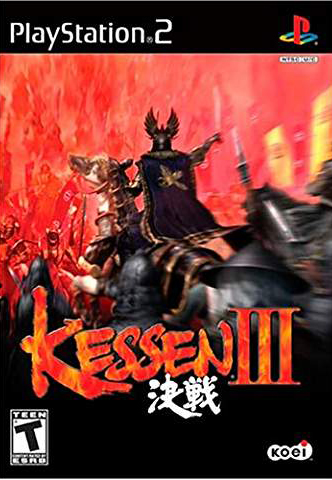 Kessen III is the first sequel to the series in almost four years and will be notable for several sweeping changes to the widely respected franchise. The series’ Crowd Engine that was used in the original Kessen has been completely rebuilt to deliver the most exciting battle scenes and action-oriented gameplay in the series- all in full 3D. Unlike any of the previous Kessen games in the series, players will have direct real-time control of troop movements, offensives, and defensive maneuvers. Moreover, allied units can join the player-controlled unit to create combination attacks!

Kessen III features non-linear stage selection, an officer and troop development system, and a process that allows players to equip officers with over 450 weapons, helmets, and samurai armor. The game's deep and compelling narrative will unfold throughout 120 combined minutes of movie sequences, accompanied by a stirring musical score from legendary composer Reijiro Koroku.

The new sequel also marks the franchise's return to Japanese history and aesthetics. It is the middle of the turbulent Sengoku or "warring states" period. Endless chaos and plunder have consumed the islands of Japan. A young teenager, known for his extravagant appearance and unconventional attitude emerges from Central Japan- he is Nobunaga Oda. While elders admonished him, his contemporaries admired him. Blessed with an indomitable vision and fearless constitution, the soon-to-be legendary Nobunaga will stand against legions of warriors in order to resurrect a land filled with chaos and sorrow.