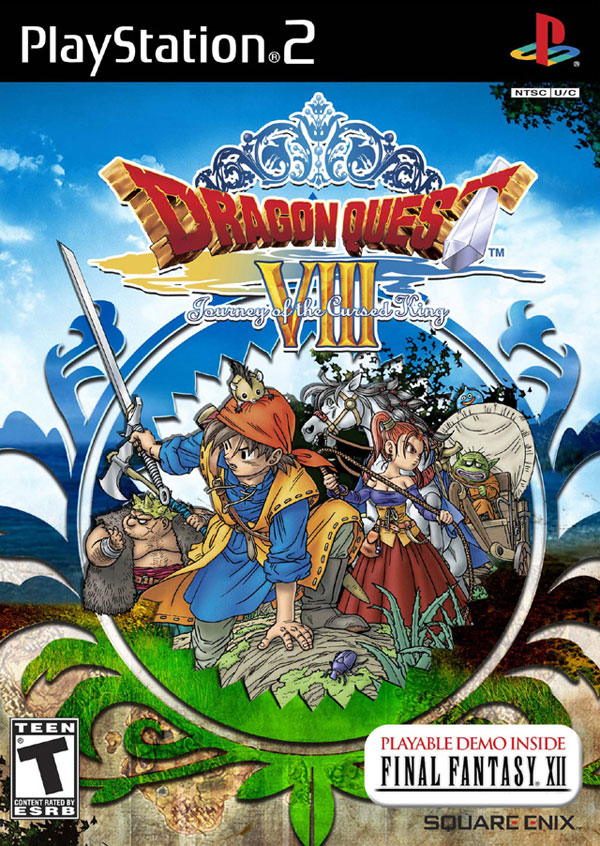 The first PlayStation 2 title in the series, DRAGON QUEST VIII is the latest in the legendary franchise that has sold over 40 million units worldwide. Updates for the North American release include: voice-overs, a full-orchestral soundtrack, a completely renovated GUI menu system, new battle abilities, and improved animations. These new additions greatly enhance the gaming experience for the North American audience. A bonus disc will also be included with a playable demo of the North American version of FINAL FANTASY XII.

The wait is finally over. DRAGON QUEST is back, now in glorious 3D! Representing the collaboration of some of Japan's finest creative talent, DRAGON QUEST VIII showcases the masterfully woven narrative of series creator Yuji Horii, the distinctive character designs of legendary manga artist Akira Toriyama, and the grandly evocative orchestral soundtrack of renowned composer Koichi Sugiyama. Charged with the task of uniting these visions, highly respected developer Level 5 delivers a richly detailed environment, vast enough to house Yuji Horii's sweeping drama, and a cel-shaded graphics engine which perfectly captures the spirit of Akira Toriyama's character designs. The result is a living, breathing world straight from Japanese anime, where the shapes on the horizon aren't just scenery, but new places to explore!

A mysterious jester. A forbidden scepter. A fiendish curse. A once idyllic kingdom lies entangled in a web of enchanted vines, its king and princess hideously transformed, its castle and subjects frozen in time. Only one person has survived this horror unscathed: you!.

Only you can save your king and country by lifting the shadow of the evil jester's curse... But it won't be easy. An epic tale of friendship, bravery, and adventure awaits you on the grassy fields, snow-capped mountains, and restless seas of DRAGON QUEST VIII!