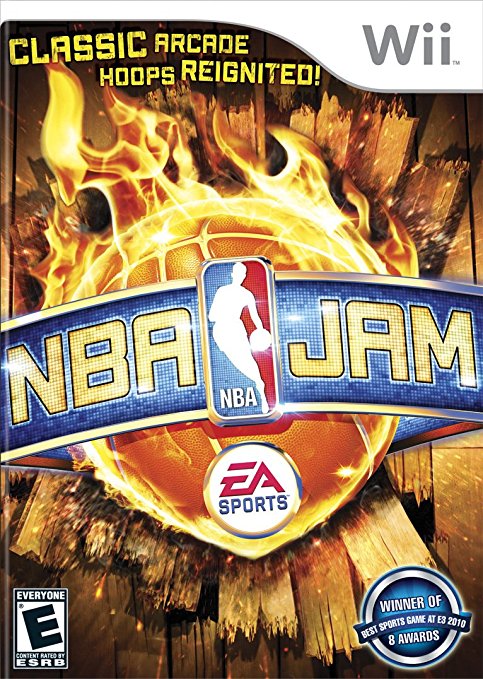 NBA JAM for Wii is an unique multiplayer arcade style basketball game that mixes the over-the-top fun of the original old school coin operated two-on-two game, and later console versions, with slick modern NBA characters and stylings. Designed with the Wii in mind, along with a distinct visual style incorporating specific player likeness', this version of the game contains a variety of game modes not found in other console versions, as well as a variety of controller support options, unlockables and representation from every team in the league.

Featuring the sights and sounds that fans of the franchise will instantly recognize, EA Sports' NBA JAM mixes old school and new school round ball stylings to deliver a one-of-a-kind sports presentation on the Wii. In this all-new arena for the game, shoves, spins and of course, backboard smashing dunks take center stage in the classic two vs. two gameplay that lies at the core of NBA JAM. In these battles, every team in the league is represented, with your favorite NBA marquee players from each ready to do your bidding in the paint, in transition and maybe, even on D. Specific to the Wii, players can choose from all new motion controls as you flip the Wii Remote on its side, or plug in the Classic Controller or Classic Controller Pro and jump in using classic controls and play option. Over-the-top NBA arcade action awaits, as well as few special appearances on the hardwood that NBA fans must see to believe.

In addition to frenetic MVP action, NBA JAM brings photo realism to the Wii. Unmatched player likeness and reactions exaggerate the outrageous moves that make up the core JAM experience, elevating the already intense gameplay to new heights. Couple all this with a wealth of game modes, classic JAM gameplay, and loads of real NBA characters and unlockables, you’ll see why the revival of NBA JAM on the Wii is a slam dunk on any gamer's home court.

An Enhanced Original - EA Sports' version of NBA JAM has the off-the-charts fun factor of the original with updated gameplay that looks and feels better than ever.