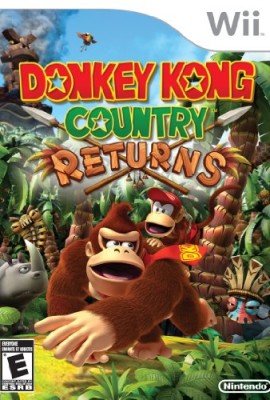 Like earlier Donkey Kong Country games, Donkey Kong Country Returns is a side-scrolling platformer, but although the game contains classic references, as well as levels and activities reminiscent of earlier games in the series, it is far from a remake.

In fact, Donkey Kong Country Returns stands very much on its own not only in its nearly 3D status, but also in its new visual treatment and control scheme. The game features the familiar team of Donkey Kong and his little buddy Diddy Kong. The goal is make your way across Donkey Kong Island collecting bananas and search for hidden items as you swing on vines, ride mine carts and more as you avoid the variety of enemies and situations set against you. New silhouette graphical treatment of both game heroes and enemies in certain levels also introduces new challenges, as players must perform all actions from within an entirely new perspective. The game also features the players choice of either the Wii Remote/Nunchuk controller configuration, or a sideways oriented Wii Remote. In addition to simple navigation and jumping movements, the Wii Remote also allows for a variety of other actions, including: ground pounds, rolls and even air blowing with simple, yet timed shaking of the remote.

In addition, the game also contains fun and user-friendly co-op functionality. In co-op mode players take on the role of either Donkey Kong or Diddy. Both characters have abilities of their own, but work together. Beyond this the game takes possibilities for cooperation even further, especially with players of different skill levels, as Diddy can if need be simply rest on Donkey Kong's shoulder and let him do all the work at times. In the event of death, either character can also be revived by the other by hitting a Donkey Kong barrel within the game.

The game also continues the series' use of additional animal friends such as Rambi the Rhino, who can serve as a battering ram and can be ridden in certain areas of the game.