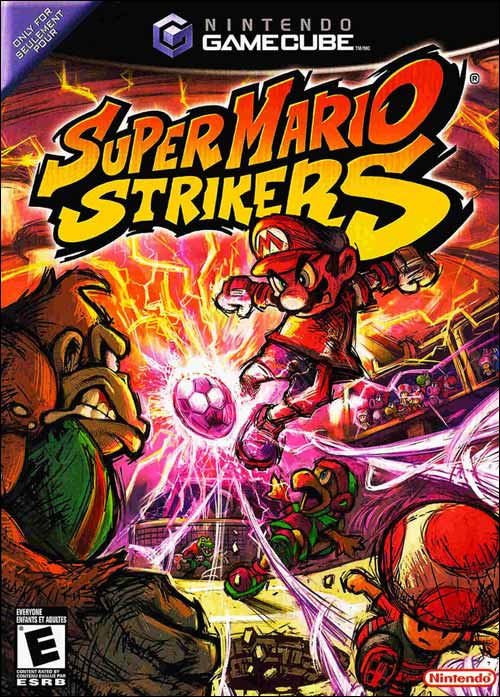 Super Mario Strikers isn't a title that gets released -- it gets unleashed.

Unleash your inner hooligan and bring all your attitude to the battle arena for the most intense Mario sports game ever!

What would happen if you took the aggressiveness of Super Smash Bros. Melee and combined it with the world's most popular sport? Hello Super Mario Strikers, a hard-hitting, action-packed soccer game like no other.

The superstars of the Mario Universe enter an arena of pain, surrounded by an electrified fence. Players have no where to run or hide and must hit or be hit. Although the winner is the one who scores the most goals, the street cred goes to the team that clobbers the other. Whether players are freezing their opponents with an ice-cold shell, blowing them up with the Bob-Omb attack or making entire teams flee in terror with a roving Chain Chomp, gamers are sure to see something new around every corner kick.

You play as one of eight captains from the Mushroom Kingdom and are paired up with your choice of Birdo, Toad, Hammer Bros. or Koopas to round out your team. A Kremling minds the net in this 5-on-5 free for all.

After you enter the arena of battle, anything goes. The pitch is surrounded by an electrified fence, and no referees are around to dish out penalties. Players are allowed to hit each other as hard as possible and at any time. The only catch is, if you hit someone who doesn't have the ball, they get awarded a power-up. Power-ups range from mushrooms that will make you go faster to blue Koopa shells that will freeze anyone in its path to Bob-Ombs that blow you to high heaven.

You also get a power-up for making a solid shot on goal. Players can attempt three types of shot: a normal shot, charged shot and Super Strike. The normal shot is as simple as pushing the B Button. A charged shot calls for you to hold down the B Button until the ball has a red glow. This gives the shot more speed and spin as it torpedoes toward the net. Often times, these shots, when blocked, leave the goalkeeper dazed. You can then just tap in the rebound for the score.

The most important shot is the Super Strike. It's worth two goals, and only your captain can try it. With this shot, you hold down B like a charged shot, but instead of kicking the ball when it glows red, a meter appears. You'll need to press B twice, both times trying to hit the meter's small green sections. If you're successful, you'll automatically score. If you fail, the goalkeeper could fire the ball right back at you, stunning you momentarily.

The gameplay successfully merges popular soccer techniques with easy-to-use controls. The controls work on different levels depending on who's playing the game. You can just play with an arcade-like, two-button system that's as easy as passing with the A Button and shooting with B. Advanced players will take advantage of the massively huge hits you can dish out with the Y Button and chuck some artillery at your rivals with the X Button. Experts at playing sports games will feel right at home with using the C Stick for dekes, trying one-timers and making lob passes.

Artistically, this is unlike any Mario sports title you've ever played. The game art has a hot, urban street edge, and the characters in the game have enough attitude for three games. You'll see when Daisy shows how smokin' hot she is after a win.

This game raises the bar for Mario sports titles and shows that you don't need a professional's jersey on your chest to play a phenomenal sports game.

What does "Complete" mean?
The buy and sell value of Super Mario Strikers (Gamecube) is based on how "complete" it is. When in the "complete" condition this used Gamecube game includes: