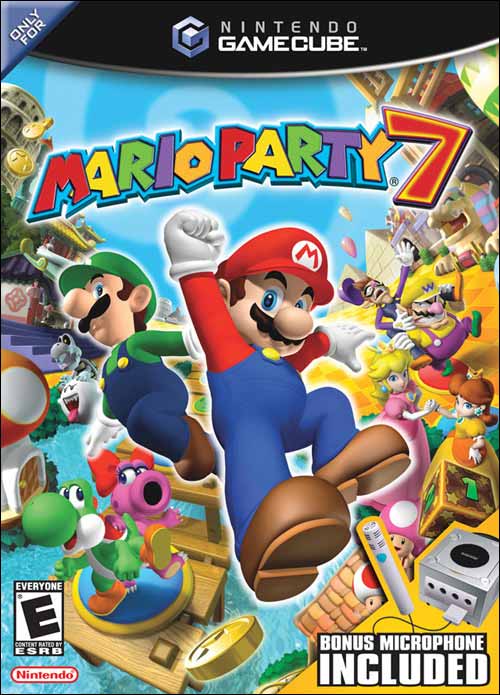 Used - No Manual, No Microphone

Grab seven of your closest friends and get ready for the wildest, craziest party ever! With six new boards, two new characters and dozens upon dozens of new minigames, Mario Party will have you rockin' as you sail the seven seas!

From leaping over electrified hurdles to avoiding a mole with a giant hammer, each game is a party in itself! The addition of two new playable characters, Birdo and Dry Bones, adds to the fun.

Toadsworth has invited Mario and all his friends to go on a luxury cruise around the world. However, someone gets left behind ... Bowser! Furious at being omitted from the exclusive guest list, the Koopa King vows revenge! When the cruise ship arrives at its first destination, the passengers discover that Bowser has turned their vacation paradise into a stress-filled madhouse!

The chief goal is to gather stars, but each board requires you to do that in different ways. You can buy a star each time you ascend Pagoda Peak -- if you have enough cash. In Neon Heights, you pay to open a treasure box. You might find a star -- or a booby prize!

Playable characters include Mario, Luigi, Peach, Yoshi, Daisy, Wario, Waluigi, Boo and Toadette, along with newcomers Dry Bones and Birdo. Toadsworth hosts the cruise. Peevish Goombas peddle power-ups and smooth-talking Shy Guys will offer you tryouts for the newest action movie or a big-league contract. Generous Donkey Kong will offer you special chances to win coins or even stars. Watch out for Bowser and the Koopa Kids, though --- you'll have to play hard just to break even against these scalawags!

Microphone is not required to play. (Optional)