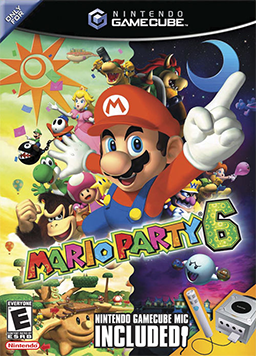 Used - No Manual, No Microphone, No Retail Packaging / Box

New board, new games, even a new microphone for voice-activated minigames!

Just in time for those long winter nights comes The Main Man himself (i.e., Mario) with fistfuls of all new games that are guaranteed to keep you mashing and mouthing (more later) 'til the break of dawn. Literally.

Every three turns on the multiplayer boards, the sun sets or rises. Barriers rise to redirect your path, spaces move or disappear altogether and scruffy characters like Boo appear. On one board, you reverse direction altogether! Minigames change appearance or may not be available at. Some even flip upside-down!

Use the Mic controller for quizzes and to bark orders to your racing character in the Shine Sprint minigame. In other minigames, the player with the Mic will verbally guide his or her character in a competition against three other characters. In Verbal Assault, for example, shout orders to blast away at your three rivals.

Besides three-on-one, two-vs.-two and four-player minigames, Mario Party 6 features Duel (one vs. one), and challenges from Donkey Kong and Bowser. Natch, the King of the Koopas doesn't miss a chance to trash-talk you beforehand. Perhaps most intriguing are Rare games. To get one of these, you have to land by exact count on the very last space on one of the three Solo Mode boards.