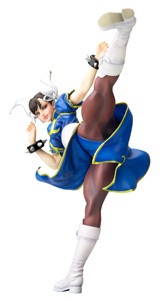 The incredible Bishoujo statues from Kotobukiya have brought you everything from superheroines to Tekken fighters, and now the long-awaited line of Street Fighter members is finally here with the one, the only, CHUN LI! One of the bestselling video game franchises of all time, Street Fighter first debuted in 1987 with its unique blend of one on one combat and international characters (and fighting styles). The beautiful and fierce Chun Li first appeared in 1991's Street Fighter II and has since gone on to become one of the most popular and recognizable characters from the series. A Chinese fighter and an undercover Interpol agent, she exemplifies justice and honorable martial arts. Chun Li is presented in a brand new Bishoujo Statue based on a new illustration by master Japanese illustrator Shunya Yamashita. 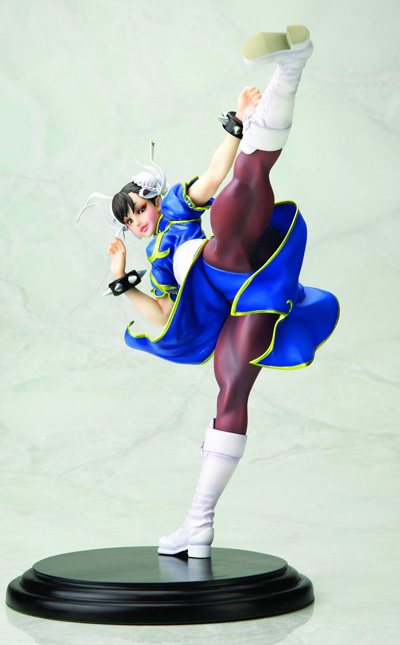 Chun Li is captured mid-kick, finishing off an unseen opponent with one of her signature moves from the Street Fighter video games. She rests solely on her right foot, her body bent at a nearly 90 degree angle while her left foot extends high into the air. The fighter wears her iconic blue outfit based on the traditional Chinese qipao with yellow piping and designs along with brown tights, white combat boots, and her trademark spiked bracelets. Not only does her intricately sculpted clothing move along with her body to create the illusion of motion, but also the ribbons tied around her "ox horns" hairstyle. The sculpted and painted details on Chun Li's outfit and lithe musculature is perfect, a perfect representation of the high quality you've come to expect from Kotobukiya. Even the fighter's face, smoothly combining the intense focus of the moment with traditional Bishoujo beauty, is captivating and eye-catching.

Chun Li stands nearly 8 inches tall (1/7 scale) on a specially designed display base. Instantly recognizable in your collection, the fighter looks great next to other Bishoujo statues including more upcoming Street Fighter members like Cammy!