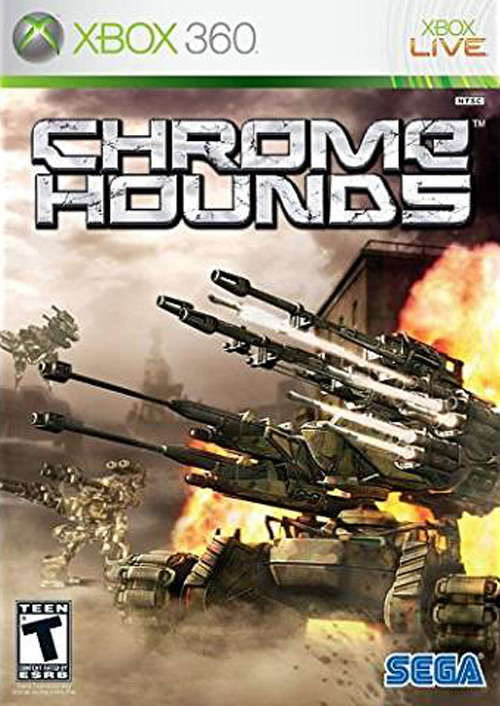 Chromehounds brings intense multiplayer HOUND combat to the Xbox 360 for the first time ever. In this massive global conflict, three nations with opposing political views have erupted in an all-out war. From the cockpit of a giant metal "HOUND", you must power your tower of heavy artillery through giant war zones while backing five others on your squad and dodging the firepower of six other live players via Xbox Live. One team member will be elected Tactics Commander and lead the team through the fray via voice commands.

You are responsible for arming and customizing your massive mechanized weapon, but overload it and you won't get very far. Your teams' successful completion of missions will open up valuable new items that will bring you all that much closer to victory. Chromehounds also offers numerous single-player missions, plus training modes for team combat and HOUND control familiarization. Features: Multiplayer combat mode allows players to build squads of up to 20 players and take to the field in clans of six for head-to-head battle with opposing clans. Conquer enemy territory to advance towards world domination.

Single player action allows players to sharpen their tactics and create a HOUND that best suits the battle. Take on the role of Tactics Commander and strategically transform your team of massive HOUNDS into unbeatable war machines. Customize your HOUND from a huge array of options to create a walking arsenal of firepower and then take it to the field in both first and third person perspectives. Wage war in 115 maps spread over three nations. Stunningly realistic battlefield effects draw you and your squad into the fast-paced fray.