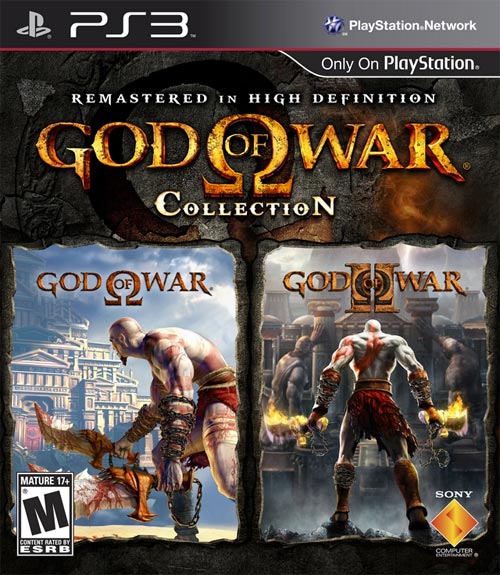 Featuring remastered versions of the first two titles in the acclaimed God of War series, the God of War Collection includes both God of War and God of War II with new anti-aliased graphics, running at 60 frames per second, and presented in full 720p HD resolution.

God of War:
Set in the dark world of ancient Greek mythology, players take on the role of Kratos, a Spartan warrior. Plagued by the nightmares of his past, the ash covered warrior would do anything to be free of his debt to the Gods and the memories that haunt him. For ten years he has labored for Olympus, now on the verge of losing all hope, the Gods have given him one last task. Destroy Ares, the God of War. Armed with the deadly chained Blades of Chaos, Kratos will have to overcome armies of mythological monsters, legions of undead soldiers, and amazingly dangerous and brutal landscapes.

God of War II:
God of War saw Kratos, a mortal warrior, set upon an epic quest to dethrone a God. But his journey did not end there. In God of War II, Kratos sits atop his Olympus throne, as the new God of War – far more ruthless than Ares ever was. To end his continued torment, Kratos must journey to the far reaches of the earth and defeat untold horrors and alter that which no mortal, or god has ever changed… his fate. God of War II sets an epic stage for a devastating mythological war to end all wars.