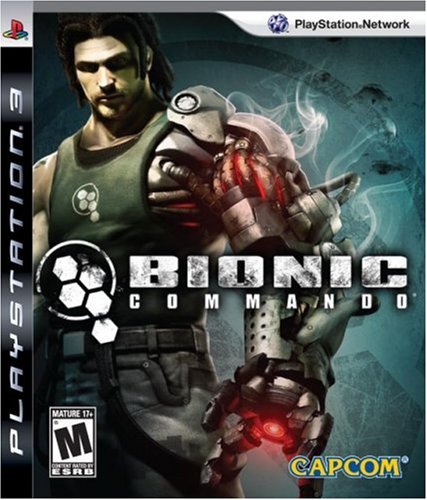 Reloaded for the latest generation of hardware, Bionic Commando sees the return of the ultimate fusion of man and machine who became a firm favourite with gamers around the world some 20 years ago with the release of the 8-bit original on the NES. Bionic Commando features Nathan Spencer (voiced by former lead singer of Faith No More, Mike Patton), as a government operative who, after distinguishing himself in a fierce conflict against the Imperials, is betrayed and falsely imprisoned by the very people he unquestioningly served.

Five years later, on the day he is due to be executed for his supposed crimes, an experimental weapon detonates in Ascension City, unleashing an immensely powerful earthquake coupled with a radiation shockwave that leaves the city in ruins, wiping out its populace. Military intelligence suggests that a large terrorist search force has moved in and occupied Ascension City, but as yet their motives remain unclear. With the terrain in ruins and the terrorists in control of Ascension City’s air defences the FSA has only one option open to them – the reactivation of Nathan Spencer.

Both the Bionic Arm and swing mechanic that made the original so unique make a welcome return. They have been upgraded to deliver a range of devastating attacks and allow Spencer to quickly traverse the game’s diverse environments. Players can harness the power of the arm in a variety of ways to take out enemies - launch huge boulders or cars; send them flying with a close-quarters uppercut; use enemies as a shield or whip them into the air transforming them into a human kite.

2. Enslaved: Odyssey to the West (PlayStation 3)