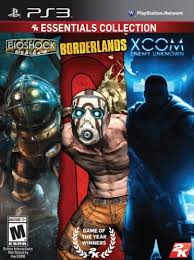 About BioShock: You are the only survivor in a North Atlantic plane crash, floating in the icy water as the fuselage sinks beneath you. Your only hope is a lighthouse in the distance, inside of which sits a submersible capsule. You climb in and you begin your decent into Rapture, a city hidden beneath the sea. Originally constructed as an idealistic society for a hand picked group of scientists, elite individuals, and industrialists, the idealism is no more. Now the city is littered with corpses, wildly powerful guardians roam the corridors as little girls loot the dead, and biologically mutated citizens ambush you at every turn. Now you're trapped, caught in the middle of a genetic war that will challenge both your capacity to survive and your moral allegiance to your own humanity.

About Borderlands: Lock, Load, & Face the Madness! Get ready for the mind-blowing insanity, as one of four trigger-happy mercenaries, taking out everything that stands in your way. With its addictive action, frantic first person shooter combat, massive arsenal of weaponry, RPG elements and four-player co-op, Borderlands is the breakthrough experience that challenges all the conventions of modern shooters. Borderlands places you in the role of a mercenary on the lawless and desolate planet of Pandora, hell bent on finding a legendary stockpile of powerful alien technology known as The Vault.

About XCOM: Enemy Unknown From the award-winning creators of Civilization comes an action-strategy game about civilization's last stand. Threatened by an unknown enemy, the Earth's governments unite to form an elite paramilitary organization, known as XCOM, to combat this extraterrestrial attack. As the commander of XCOM, you control the global defense team in a battle against a terrifying alien invasion by creating a fully operational base, researching alien technologies, planning combat missions, and controlling soldier movement in battle.