Dead or Alive 5 Plus  (PlayStation Vita) 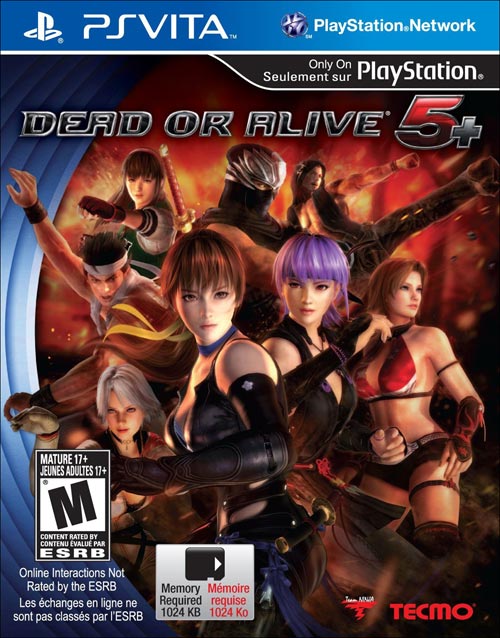 Dead or Alive 5 Plus takes the signature fighting style of the popular DOA series along with stunning graphics and new martial arts techniques of the recent console release, and brings it to the Vita with all-new system-specific features.

In Dead or Alive 5 Plus, players will take on the roles of the cast of Dead or Alive fighters in an intense, action-packed brawler set in visually striking locations from around the world. The famed DOA hand-to-hand combat returns, supported by 3D stages that update the series' characteristic style with a fresh look and feel. Stages in Dead or Alive 5 Plus are more than spectacular visual backdrops, instead playing to a fighter's strengths. As a fight progresses, the backdrop will change and interact with players.

Skilled fighters will be able to utilize these dynamic stages to pit their opponents against fresh obstacles to create a new fighting experience. This fusion of combat and dynamically changing backdrops is the formula for the evolution of fighting games as "Fighting Entertainment." With a sensual yet realistic style, Dead or Alive 5 Plus characters are rendered in incredibly lifelike detail.

Innovative touch controls bring a completely new experience to fighting games. Simple taps, swipes and pinches to your opponent trigger a variety of devastating moves. Using the Vita's motion sensor, you can play vertically for a first-person, full-screen view of your opponent. These intuitive new controls are only possible with the PS Vita's touchscreen and rear touch pad. Both novice and expert players will find even more ways to up their game with Dead or Alive 5 Plus.

New modes focused just on training offer tutorials on game basics, and a new display of advanced frame data offers over twice as much the amount of information on each move than the previous version. Tournament players will spend hours analyzing the best moves for their fights.