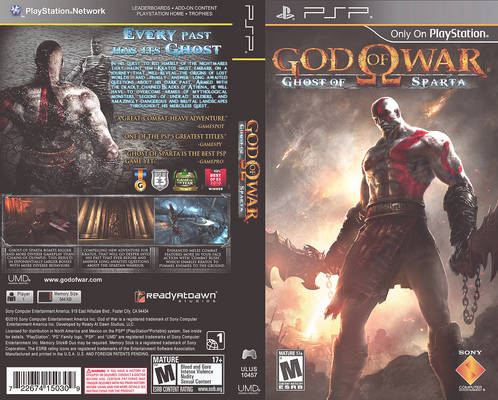 With a sophisticated new storyline set once again in the realm of Greek mythology, God of War: Ghost of Sparta immerses you in a fierce single-player saga uncovering the mystery behind Kratos’ curse. Beginning where God of War concluded, Kratos, haunted by visions of his mortal past, heads on a journey of discovery and revenge; a journey that will reveal the origins of lost worlds and answer long unanswered questions about Kratos’ tattoo, scar and the demise of his family.

Take up the deadly Blades of Chaos as the all-powerful Kratos, and overcome the might of ancient Greece, battling mythological creatures and armies. Unleash total chaos with one of the awesome new weapons at your disposal, and perfect your skills with a range of agile new combat moves ready for the fights that are sure to cause serious damage.

With significantly extended gameplay delivering hours of intense action, the latest addition to the iconic God of War series will stun with its depth and scale. Ready at Dawn has used the latest visual technology and enhanced texture resolutions to deliver a realistic feel, coupled with fluid, life-like characters, a robust weapon system, new magical powers and navigational abilities bring the epic adventure to life – wherever you are.

God of War: Ghost of Sparta will be a must have when it releases exclusively for PSP later this year in 2010. As long as you don’t mind a little bit more blood on your hands.