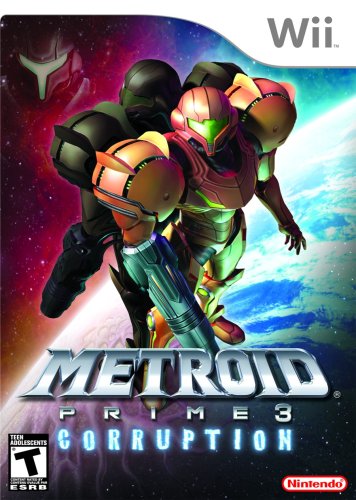 The trilogy ends ... with a bang! Six months have passed since the events on the planet Aether. The Galactic Federation's network computers, Aurora Units, are suddenly and completely corrupted with something like a virus, and only quick action saves the entire network from going down. The Federation believes Space Pirates may be behind the problem and, beginning with Samus, starts to contact bounty hunters. As it explains the situation to the assembled hunters, the Federation is attacked by the pirates. Samus and the other hunters leap to the defense of the Federation capital, only to find that the enemy the hunters face is the presumed-dead Dark Samus. Dark Samus defeats Samus and the other bounty hunters, corrupting them with Phazon in the process. They are all subsequently outfitted by the Galactic Federation with Phazon Enhancement Devices (PEDs) that can harness their corruption to enhance their powers. After learning to use this enhancement, called Hypermode, Samus sets off after Dark Samus, who has begun to seed other planets with Phazon by launching enormous Phazon seeds called Leviathans into them. As the Phazon begins to slowly corrupt Samus, the final saga in the Metroid Prime trilogy begins.

How to progress through the game: The war initiated by Dark Samus and the Space Pirates ranges across many planets as Dark Samus attempts to corrupt each with Phazon seeds. Use the Hypermode system and Samus' weapons – like the Power Beam, Morph Ball and Scan Visor – to explore alien landscapes, hunt for weapons and information, and destroy the seeds, all the while balancing Samus' Phazon corruption with the powers granted to her by the PED suit. Saving the planets from corruption isn't enough, though. Eventually, players must take down Samus' mortal enemy, Dark Samus, as well.

Special powers/weapons/moves/features: Besides using the Wii Remote and Nunchuk controllers to pull off amazing feats like aiming and blasting in midair or at a full run, players also have an array of different weapons at their disposal. In true Metroid fashion, these become powered up as the game progresses. Multiple sensitivity settings for aiming ensure that the game controls like a dream for both novice players and veteran first-person shooter enthusiasts. Not only that, but the controller is used for a number of other game elements beyond the traditional first-person shooter standards, like physically interacting with machinery (by pushing, twisting and pulling the Wii Remote) and latching onto things with Samus' grapple beam (by casting forward and then yanking back the Nunchuk). Players can also access their different visors via a quick-select system: They simply hold down the Minus button and point at their selection.

Advanced Aiming: Advanced players will find the Lock-on Free Aiming system is unparalleled. Players can lock the camera on enemies with the Nunchuk's Z button, yet still have complete control of where they aim with the Wii Remote. The result is perfect first-person control.