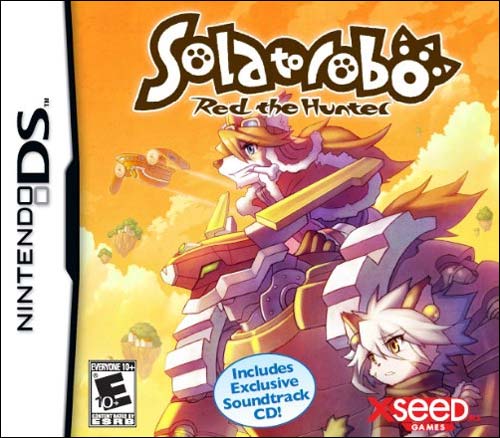 Red Savarin, an eager and ambitious 17 year-old anthropomorphic dog, ventures through the mythical floating islands of the Shepherd Republic where specialized robots are commonplace, living a carefree life traveling with his younger sister, Chocolat, and utilizing his personalized robot, DAHAK, to complete various odd jobs for money.

While on a routine retrieval mission, they have a chance encounter with a mysterious boy named Elh and find a medallion that inadvertently entangles Red in something much more than he bargained for.

Having taken Elh under his care, Red investigates the mystery surrounding the young boy and the strange object as he takes on monsters, sky pirates and evil robots on his road to becoming the reluctant hero that must save the world from a swiftly awakening evil.

This first print run of Solatorobo: Red the Hunter includes an artbox and a 24 track CD Soundtrack.