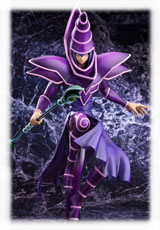 A KOTOBUKIYA Japanese import! The hit line of ARTFXJ statues from the world-famous manga/anime series Yu-Gi-Oh! Duel Monsters brings back one of the coolest characters with a stylish new look for a Kotobukiya Japan Store Exclusive, DARK MAGICIAN -DUEL WITH DESTINY-! 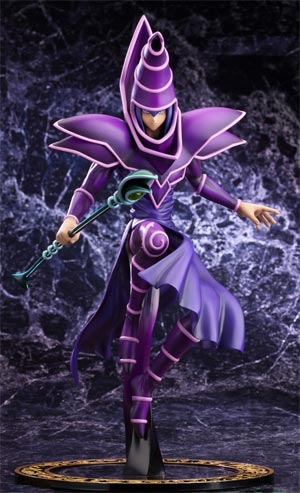 Joining Seto Kaiba, Yami Yugi, and the rest, the new Dark Magician is based on the previous release of the same character but with an all new dark paint scheme. One of Yugi's signature cards, the powerful magician was later revealed to be the spirit of an ancient priest and servant of Pharaoh Atem.

The Dark Magician wears the same unique layered armor, intricately sculpted in overlapping plates, and his aggressive pose highlights his otherworldly body type as well as his billowing skirt. New for this version are a predominantly dark purple color with pink accents and piping, a more human-like skin tone, and a sleek green color for his staff.

Sculpted by Haruhi Murakami, Dark Magician -Duel with Destiny- is nearly 12 inches tall (1/7th scale) as he hovers on his magical display base. As a special bonus, the new dark one comes with a B2 size tapestry illustration of Yami Yugi & Dark Magician by Takahiro Kagami!

Summon the Dark Magician to join your Yu-Gi-Oh! collection.