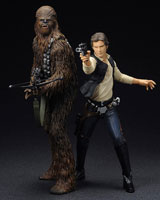 The incredible Star Wars ARTFX+ lineup has already featured some of the most iconic heroes and villains from the Star Wars films, and now it expands to an epic team up of two of the most popular characters of all time, HAN SOLO & CHEWBACCA!

Jumping straight out of Episode IV: A New Hope, the inseparable smuggling duo stands side by side ready to take on the forces of the evil galactic Empire. Literally from different worlds (Corellia and Kashyyyk), Han Solo and Chewbacca formed an unlikely yet lasting friendship that would resonate with fans from their first appearance. 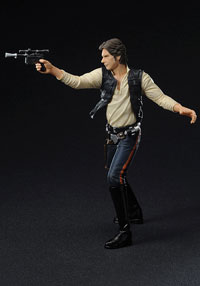 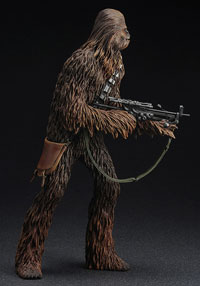 Ready to take on anything the Empire might throw at them, the pair of space scoundrels advance in turn as they point their weapons at hordes of ineffective Stormtroopers. Han wears his iconic outfit consisting of a white shirt, navy vest, orange-striped blue pants, belt with holster, and tall black boots. Meanwhile, his Wookie partner is au naturale as usual, covered in thick brown fur broken up only by his bandolier.

Both level their respective trademark weapons, a BlasTech Industries DL-44 heavy blaster pistol for the former and a crossbow-like bowcaster for the latter. Kotobukiya's renowned craftsmanship is evident in all of the fine details from Chewie's intricately sculpted fur to the folds and creases in Han's clothing! 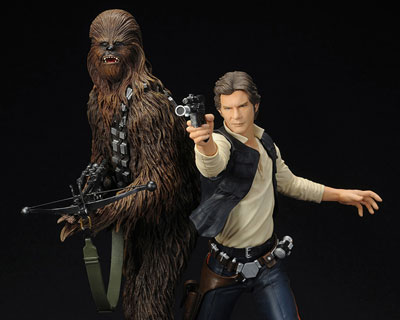