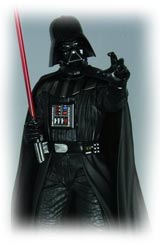 The Dark Lord of the Sith is back! The latest release in the hit line of smaller scale Star Wars ARTFX+ Statues steps right out of Return of the Jedi: DARTH VADER RETURN OF ANAKIN SKYWALKER ARTFX! An all new representation of the iconic villain, Vader joins the elite lineup of your favorite heroes and villains from the original Star Wars films in the Saga Collection, following great statues like the Empire Strikes Back version, Boba Fett, C-3PO, and R2-D2. More powerful than ever before in the Force as well as mastery of the lightsaber, Darth Vader prepares for his final battle as the Rebel fleet hammers the fully operational Death Star.

Updated to match his appearance in Return of the Jedi, the fallen Jedi stands with his crimson lightsaber at the ready for both attack and defense. A tall and imposing figure, Vader is like a coiled viper with his legs slightly bent and his lightsaber held in both hands. The Dark Lord's armor is intricately detailed and sculpted perfectly to match its appearance in the film with all of the mechanical and cloth elements distinctly textured. You can even display Vader in a variety of poses and looks with multiple interchangeable arm parts and head pieces featuring the iconic helmet or the unmasked Anakin Skywalker! 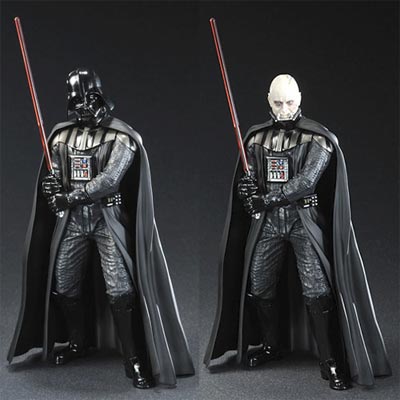 Like all Star Wars ARTFX+ Statues, he has magnets in his feet for display on the included base. ARTFX+ Statues are fun-to-assemble pre-painted snap-fit kits that can be easily put together in seconds without glue or modeling skill. Darth Vader stands approximately 7.5 inches tall (1/10th scale) and is the perfect centerpiece for your Saga Collection! A KOTOBUKIYA Japanese import!