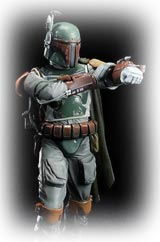 The galaxy's most feared bounty hunter returns to the hit line of smaller scale Star Wars Saga Collection ARTFX+ Statues! A clone of Jango Fett and one of the freelancers chosen to hunt down Luke Skywalker for Darth Vader, the armored jetpack-toting mystery man joins the ARTFX+ line in a new version representing his appearance in the final film: BOBA FETT RETURN OF THE JEDI VER.! With an all-new sculpt and paint scheme this is a great successor to the previously offered Empire Strikes Back Fett.

Cold and calculating, Boba Fett is never encountered without his full suit of Mandalorian armor and trusty blaster rifle. The armor plating over a full-length bodysuit clearly shows the wear and tear of a life of crime, along with all of the personal touches added by Fett over the years like the cape and unique built in weaponry. The bounty hunter is a perfect likeness of the character specifically from Return of the Jedi, down to the correct colors on his armor and cape. Boba is posed in a new fighting stance and comes with interchangeable parts so you can display him wielding his iconic blaster or preparing to fire his wrist-mounted gauntlet weapons! Like all of the Star Wars ARTFX+ statues, Boba Fett has magnets in his feet for extra stability on his included display base.

ARTFX+ Statues are fun-to-assemble pre-painted snap-fit kits that can be easily put together in seconds without glue or modeling skill. Boba Fett stands over 7 inches tall (1/10th scale) and looks great displayed alongside all of the other Saga Collection statues! A KOTOBUKIYA Japanese import!