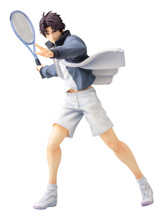 Keigo Atobe is the captain of Hyoutei. As a former European junior champion, he was relatively unknown in Japan until he defeated all of the members of the team in his first year and the Seigaku captain in his second year. He is severely narcissistic and arrogant, often using the quote "Be awed at the sight of my prowess!" He is very wealthy, and he owns various chateaus, mansions, and vehicles, which are often used to benefit the team. Despite his personality, he trains constantly and takes pride in the team. He has rivalries with Tezuka, who he defeats in the Kant? Tournament, Sanada, who he would have defeated in a practice match but Yukimura called it off, and Ryoma, who he loses to in the nationals. Atobe, using his superior eyesight, is able to use "insight" to quickly determine another player's weakness, which he uses to his own advantage. He eventually develops it to the point where he is able to anticipate the spin of the tennis ball by looking at the way his opponent hits it and apply the proper counterspin. 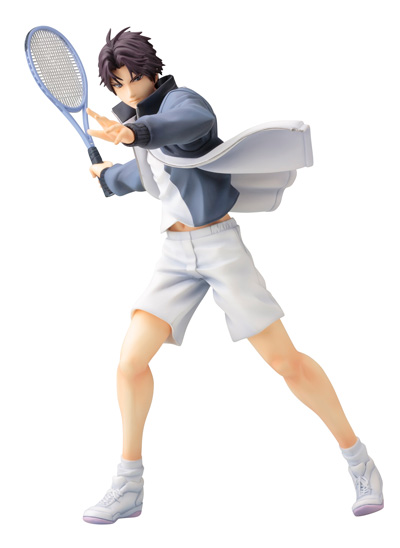 Kotobukiya expands its line of ARTFXJ statues based on the popular Prince of Tennis series with Keigo Atobe! Kotobukiya's sculptors capture the action and motion of the piece with Keigo's jacket flowing around him as he twists in preparation of a backhand swing Keigo stands over 21 cm/8.3 in tall in 1/8 scale, and comes with two differen facial expressions. Kotobukiya's famed craftsmanship is in evidence in all the fine details from Keigo's hair down to the folds and creases of his clothing Display Keigo alone or alongside other Prince of Tennis ARTFXJ statues from Kotobukiya!