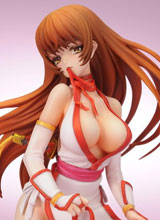 On the eve of 2006 Tecmo released the XBOX 360 sequel to Dead or Alive 3, Dead or Alive 4. Following the story of Helena, the newest chairperson of DOATEC, DOA 4 updated the classic one-on-one combat series with new characters and interactive fighting arenas! One of the returning characters (and longtime fan favorite) was none other than the female ninja and member of the Mugen Tenshin Ninja Clan who appears in all new Ani*Statue, KASUMI 'CHERISH!'

The rebellious warrior abandoned her training and destiny to compete in the Dead or Alive tournament, eventually confronting Raidou, the man who crippled her brother. Kasumi won the first tournament when she killed the villain, and then went on to participate in each subsequent event. When it was time to design a new version of Kasumi, Koto went to one of the most popular illustrators in Japan, Oyari Ashito. Renowned for his heart-grabbing girls, Ashito created an all new special illustration for the warrior that captures her alluring beauty.

Dressed in her revealing Dead or Alive 4 costume, the sultry Kasumi bends forward while lifting up the front of her outfit provocatively and nibbling on the ribbon tie to her top. The girl's pretty brown hair falls down behind her white, red, and pink robe, while behind her back rests Kasumi's trusty sword. The fully pre-painted fighting beauty comes with an exclusive miniature clear poster of Kasumi x Oyari Ashito design. Kasumi stands over 8 1/2" tall (in 1/7th scale) on a specially designed display base.