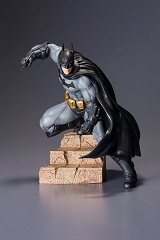 For the next awesome DC Comics ARTFX+ Statue Kotobukiya has switched gears from the New 52 to one of the most popular video games in recent history with BATMAN ARKHAM CITY! After witnessing the brutal murder of his parents, young Bruce Wayne was forever scarred and turned his angst and enormous fortune toward training and outfitting himself as Gotham City's premiere vigilante. In the revolutionary 2011 video game (itself a sequel to 2009's Arkham Asylum), Batman patrols the "Arkham City" super-prison, utilizing all of his tricks and equipment to stay alive.

Perched atop a stone cornice, Batman surveys the dismal world of Arkham City and prepares to leap into action! The solitary crime fighter wears his iconic costume from the video game, and the incredible sculpt highlights every part of it in perfect detail. Leaning forward off the rooftop Bruce Wayne stares straight ahead, his long cape trailing around him and one arm pulled back and ready to unleash vengeance. Batman comes with two different interchangeable accessories for that hand, his grapnel gun and a standard batarang! The subtle movement of his cape draped over his side and his tense stance give Batman the appearance of being ready to spring to the attack at a moment's notice right off of your shelf!