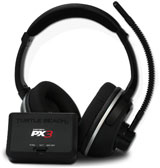 While designed primarily for the PS3, the PX3 also works great as an XBOX and PC gaming headset. When used in PS3 and XBOX modes, the PX3’s unique digital signal processor provides game and chat audio presets that tune the headset sound for different gaming situations. Presets can also be replaced with different ones downloaded from the Turtle Beach website. There’s also a rechargeable battery that provides more than 10 hours of game play between charges. The battery can be charged while gaming, so you’ll never miss out on the action.

If you’re serious about gaming, then get serious about the sound. Step up to the PX3 and experience game audio like never before.