The HDMI Switcher allows access to multiple HDMI devices, such as DVD players and Satellite set-top boxes to one HDMI display. It's a best choice for home theater systems and dual computer users. No more hassles of manually plugging in different HDMI connectors to view different HDMI sources.

This kind of mini HDMI switch is smaller in size and more beautiful in appearance. It routes high definition video (in multiple resolutions up to 1080p) and digital audio from any one of the three sources to the display unit. It can be used by controlling the IR remote or by pushing button. Design may vary. 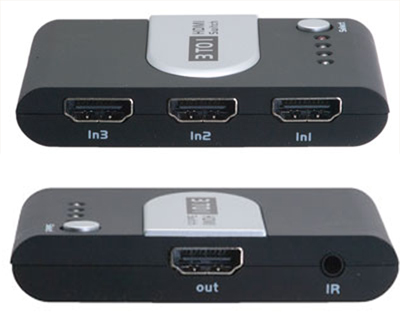 What is HDMI?
The High-Definition Multimedia Interface (HDMI) is a compact audio/video connector interface for transmitting uncompressed digital streams. It represents a digital alternative to consumer analog standards such as Radio Frequency (RF) coaxial cable, composite video, S-Video, SCART, component video, D-Terminal, and VGA. With 19 wires wrapped in a single cable that resembles a USB wire, HDMI is able to carry a bandwidth of 5 Gbps (gigabits per second). This is more than twice the bandwidth needed to transmit multi-channel audio and video, future-proofing HDMI for some time to come. This and several other factors make HDMI much more desirable than its predecessors, component video, S-Video and composite video.

HDMI is an uncompressed, all-digital signal, while the aforementioned interfaces are all analog. With an analog interface, a clean digital source is translated into less precise analog, sent to the television, then converted back to a digital signal to display on screen. At each translation, the digital signal loses integrity, resulting in some distortion of picture quality. HDMI preserves the source signal, eliminating analog conversion to deliver the sharpest, richest picture possible.

Though standard HDMI or "Type A" has 19 wires, "Type B" will have 29 wires. The latter is targeted for the motion picture industry and other professional applications. Both varieties are "Intelligent HDMI," referring to the built-in capability for HDMI-enabled components to talk to each other via the interface. Auxiliary information can provide all-in-one remote functionality and other interoperable features not possible in previous interface technologies.

HDMI supports standard video formats, enhanced video and high-definition. It is also backwards compatible with DVI (Digital Video Interface). High-end graphics cards featuring a DVI port can connect to a HDMI interface via a DVI/HDMI cable. This is simply a cable with a DVI connector on one end and a HDMI connector on the other.