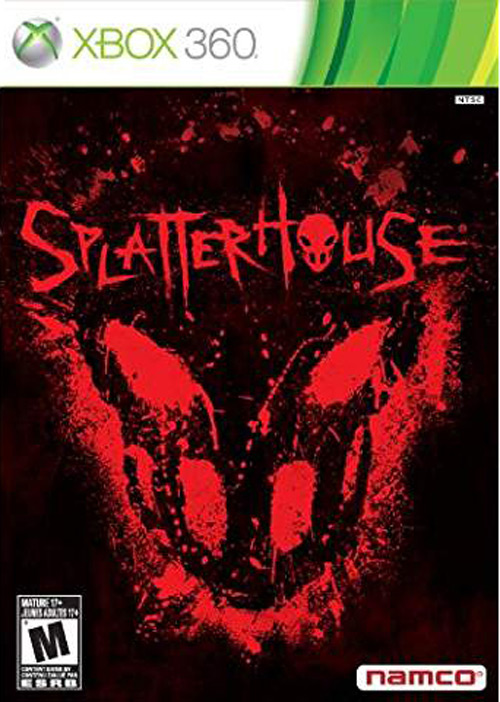 Splatterhouse follows college student Rick Taylor as he tries to rescue his girlfriend, Jennifer, who has disappeared after entering the mysterious and run-down West Mansion. Confronted by horrific other-worldly creatures, Rick comes across a mystical sentient mask that promises to give him the power to find Jennifer. Full of desperation and rage, Rick puts on the “Terror Mask” and is transformed into a juggernaut of pure violence and destruction. Featuring an original storyline by critically-acclaimed comic book writer Gordon Rennie (Necronauts, Judge Dredd), Splatterhouse takes Rick beyond the mansion as he scours the ends of the world to rescue his beloved Jennifer.

Embodying the unfiltered, primal aggression of its namesake, Splatterhouse gives players countless ways to decimate the mansion's assortment of demons, monstrosities and abominations. Featuring a dynamic combat system, Rick will be able to use his brute strength to perform bone-crushing melee combos, savage grapples and wield an assortment of makeshift weapons including the series' trademark 2x4 and even limbs and heads ripped from enemies themselves. Players will also be able to reanimate the corpses of fallen enemies to fight alongside Rick, imparting strategic depth to the game's battle and unique puzzle systems. More agile than ever before, Rick can now leap great distances and propel himself to out of reach areas by swinging from outcroppings in the environment, adding an all-new level of exploration to the series.

Introducing a new regeneration mechanic, players will be able to determine Rick's status in battle by visible cues detailing how injured he is, doing away with the traditional health bar. If he succumbs to the mansion's deadly inhabitants, they will begin to dismember him, savagely tearing away limbs and ripping at his flesh to expose his internal organs. To survive, Rick must call upon the power of the Terror Mask to regenerate his mutilated body, allowing players to watch in gory detail as bones, veins, muscles and skin return to his body in real-time.