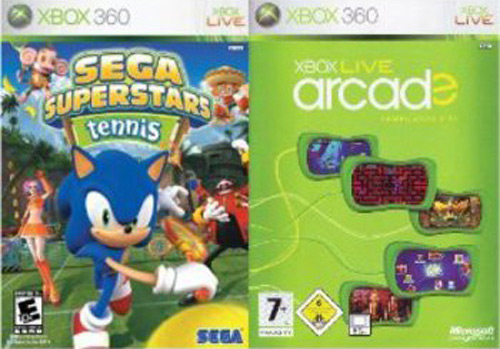 This double pack, originally included in the Holiday Arcade system bundle, contains Sega Superstars Tennis & the Xbox Live Arcade Compilation disc. The package contains 2 discs total, with each game being exactly as if you were to purchase them seperately, the only difference is the case.

Sega Superstars Tennis: Sixteen fan-favorite SEGA characters from Sonic to NiGHTS are serving up non-stop fun in SEGA Superstars Tennis. Multiple madcap mini-games will keep the party rolling and up to four friends can challenge each other in tournaments, exhibitions, and unlockable special events. With hilarious cameos and comical guest umpires from SEGA’s rich gaming history, this fun-filled tennis party is guaranteed to be a smashing good time for the whole family!

Xbox Live Arcade Compilation Disc: This compilation disc features the following 5 arcade games, playable exactly as if you downloaded them from the Xbox Live arcade.