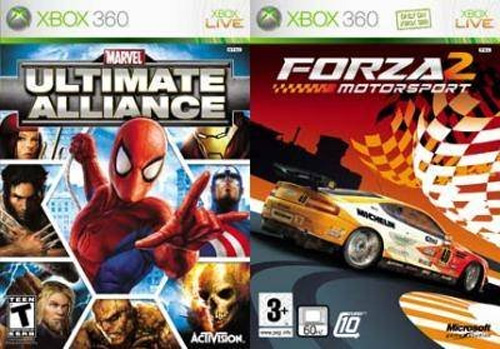 Are you passionate about cars and racing? Then, Forza Motorsport™ is your game. Own, customize, and race your favorite cars in the most technologically advanced and realistic driving sim yet.

“Forza Motorsport 2” roars into the next generation with more than 300 customizable cars and 60 frames per second of head-turning, high-definition gameplay that creates the most stunningly realistic racing simulation ever experienced.

Use race earnings to buy upgrades and aftermarket parts, so you can transform real production cars into high-performance racers. On the track, experience an impressively accurate simulation, while putting your performance-tuned creations to the test against the online gaming world on Xbox Live.

Get a unique look at car cultures around the world in these five short films that profile real-life enthusiasts.

Marvel: Ultimate Alliance is an all-new action/RPG where players create their Marvel dream team from the largest roster of Super Heroes ever in an epic quest that will determine the fate of Earth and the Marvel universe. For decades, Earth's Super Heroes have opposed evil in their own cities, and on their own terms. But now, Dr. Doom and a newly reformed Masters of Evil – the greatest collection of Super Villains ever assembled – have plans for world domination, and the heroes must band together to defeat them. Playing as some of the most revered Marvel characters, gamers will embark on a dangerous journey across exotic terrain and well-known comic book locations like Atlantis, the Shield Heli-Carrier and the Skrull home world in an attempt to defy the world's most notorious Super Villains. Created by Raven Software, Marvel: Ultimate Alliance lets players control the most powerful Super Hero alliance the world has ever known.