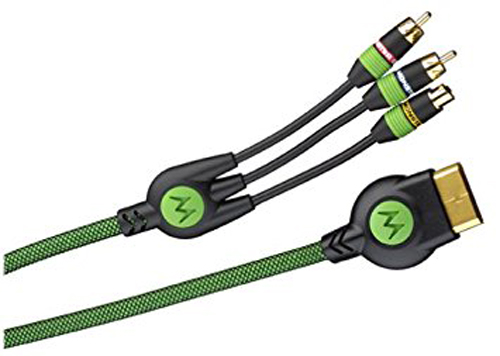 With its 250MHz GPU drawing 125 million polygons/second, a 733MHz Intel Processor and an audio processor that will support 256 stereo voices, 3D audio, and Dolby AC3 encoding, Xbox™ unleashes the most powerful gaming experiences ever in a mind-blowing fusion of fantasy and reality.

S-Video is the preferred high performance connection, because it sends the video signal in separate Chrominance (color) and Luminance (brightness) channels, for a picture that is richer in color, brighter and sharper. It also gets rid of "dot crawl", the annoying, flickering along object edges. Gamelink 300 X uses advanced technologies like nitrogen gas to ensure the best S-Video signal possible.

Your Xbox is state-of-the-art when it comes to audio quality. But its sonic performance is only as powerful as the cable used to connect it. GameLink features patented cable technologies that allow you to expand you Xbox's audio as your own sonic needs evolve. GameLink's digital audio output jack, which makes it easy for you to upgrade to Dolby Digital Surround Sound. LightWave 100 X (sold separately), Monster's highest performance fiber optic audio hookup, completes the upgrade to a pure digital audio connection.

Maximize Your Gaming and Movie Investment

You've already invested in the most killer video game system around. Why not play with the best picture and sound possible? With GameLink 300 X, you'll get all the power and performance your Xbox was designed to deliver.