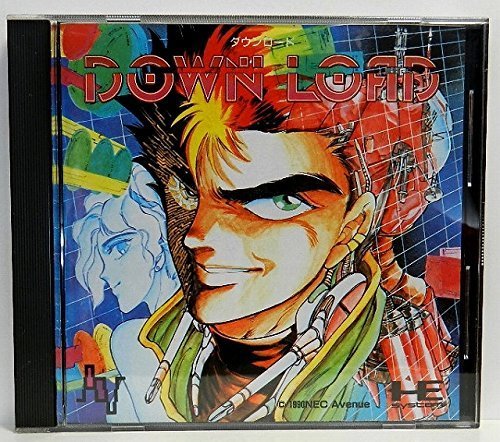 Download for PC Engine requires a HuCard Converter to be played on a US TurboGrafx-16 or TurboDuo.

Nearing the end of the 21th century, human society entered a development stage that was dubbed "neo capitalism". Powerful mega-corporations built gigantic computer systems which were able to create entire virtual worlds, where humans sought refuge from the grim reality and the certainty of death. But crime flourished in the cyber world as well; a unit of special agents called "cyber divers" was created in order to fight criminal organizations. Syd is one of such cyber divers. His companion Ohala was once trapped in the cyber world and never returned. And now, another friend of his, the lovely Deva, tells him that she has been arrested while trying to investigate Ohala's disappearing. It's time for Syd to ride his flying bike and get to the bottom of the business - in real world as well as in the dangerous virtual reality.

Down Load is a side-scrolling shooter. The player controls Syd on his flying bike, which acts, for all purposes, like other aircrafts in comparable games. Before each mission, the player selects one of the two available main weapons: vulcan cannon (spreading fire, up to five directions if powered-up), and laser beam (powerful, focused fire; beams are added with power-ups). The secondary weapons include homing missiles, a bomb-like gadget, and a shield - all with limited ammunition/energy.

The stages include real-world locations as well as abstract "computer-like" virtual reality worlds, with geometrical figures and computer-related objects as enemies. Boss enemies usually guard the exit to each level, and utilize a variety of shooting patterns to stop the hero. Anime-style cut scenes advance the story between the missions.