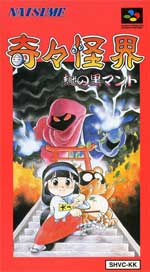 Not compatible with US Super Nintendo systems.

Action shooter published by Natsume for Taito, set in ancient, magical Japan. The Super NES title (known as Kiki Kaikai: Nazo no Kuro Manto in Japan) is a sequel to Taito's Japan-only arcade title, Kiki Kaikai, which also appeared on the PC-Engine and Famicom Disk System.

The game is set amidst the templates and shrines of ancient Japan and stars the two title characters, Pocky (originally named Sayo-chan), a young temple priestess, and Rocky (Manuke), her pet tanuki (a Japanese raccoon dog). Players can switch off between controlling the two characters and attack with melee and ranged combat or team up for two-player cooperative action.

What does "Complete" mean?
The buy and sell value of Kiki Kaikai Nazo no Kuro Manto (Super Nintendo/SNES) is based on how "complete" it is. When in the "complete" condition, this used Super Nintendo (SNES) game includes: