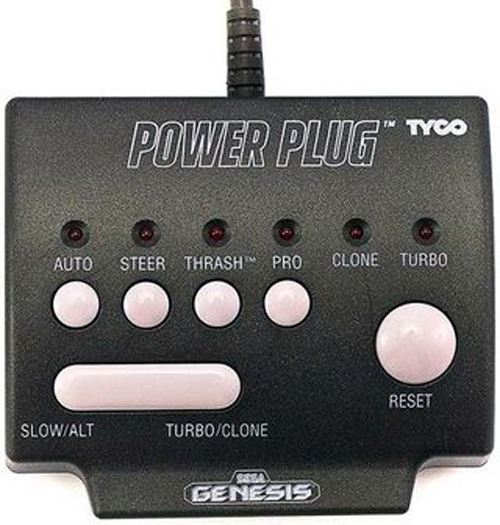 Have you ever wished that you could modify your control pad to work a little differently? Like give it rapid turbo fire, or reconfigure the buttons to best suit your style of play? Well, your wait will soon be over. The new Power Plug from Tyco can help you do all those things, and more.

Special Street Fighter II Moves
Let's say you're fighting as Ryu in Street Fighter II, and you want to use his special move, the Fireball. Normally you would need to press a total of four buttons to make this move, but with the Power Plug's Trash feature, you can make just one button do the trick. The same goes for other moves, such as Ryu's Dragon Punch and Hurricane Kick, as well as the special moves of the other fighers. A total of eight Trash settings are dedicated to special Street Fighter II moves, making complex button combinations a thing of the past.

Learning Mode
You can also use the Power Plug's Learn mode to reconfigure the buttons on your controller, even if the game itself does not allow you that option. For example, suppose the game uses Button A to punch and Button B to kick. If you want to change the button configuration so that Button B punches, you press the Learn button, press Button B (the button to be changed), then Button A (the punch button), and finally press Learn again to tell the Power Plug you're done.

Better still, you can teach your controller to make one button do the work of many (referred to as a "macro" in the computer world). For example, suppose you want your character to punch and kick then jump, all in rapid succession, and you want to configure Button A for this combination move. After pressing the Learn button and Button A, you can then press the buttons that would normally make these moves individually, and then press Learn again. Now when you press Button A, your character will make all the moves that you programmed for that button, in the order you programmed them. And if the game allows it, you can program the button so that moves occur simultaneously -- just hit the buttons at the same time when you are in Learn mode.

Other special combinations you can program include "Turn Around and Fire," which makes your character turn in the opposite direction, fire, and then turn back. You can even set the speed of this maneuver using the Turbo Bar.

Other Features
The Power Plug has other features that can breathe new life into tired old controllers. Like Power Steering, which can give you incredibly smooth directional control, making it ideal for flying and driving games. Or the Turbo Bar, which lets you turn any button into a turbo firing button, and even lets you adjust the firing rate of individual buttons.

Tyco's Power Plug would make a valuable addition to any serious gamer's arsenal. With its flexible learning mode and its wide selection of preset options, the Power Plug will take you to The Next Level in gaming proficiency.