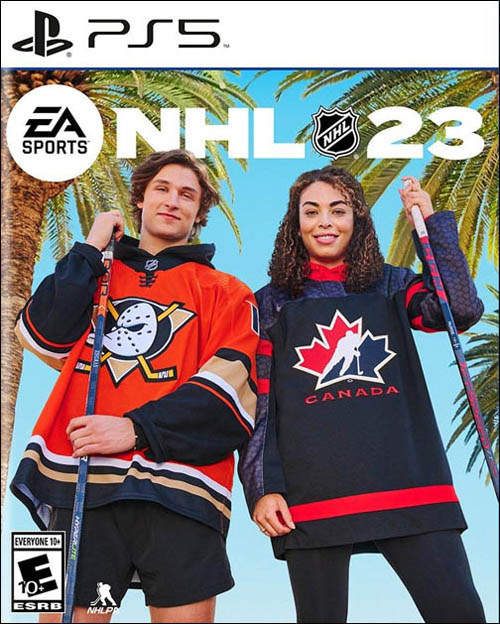 Hit the ice with EA SPORTS NHL 23 on PS5. Play in various modes make strategic decisions, collect players, and build your ultimate team as you rise to fame on the ice in this highly-anticipated hockey video game.

EA SPORTS™ NHL® 23 is greater together. Get the best players in the world on one lineup with the introduction of mixed women’s and men’s teams in HUT. Arriving as post-launch updates, cross-platform matchmaking for players on the same platform generation in HUT and WOC means deeper player pools, shorter queue times, and more teams for your squad to square up against. And now, add to your highlight reel with over 500 new Last Chance Puck Movement gameplay animations that let you control how a play unfolds after any level of contact is taken, from performing passes out of stumbles to desperation shots from the ice. Plus, overhauled strategy systems allow you to easily gameplan and finetune your playmaking skills. So grab your friends and gear up for the most dynamic, connected, and visually rich Chel experience yet.

Players who start playing NHL 23 on PlayStation®4 or Xbox One will be able to transfer their HUT Team value and progress to the next generation of their respective platforms in PlayStation®5 or Xbox Series X|S. This migration means that within the NHL 23 title:

Players can protect 20 player items + Coach in their current lineup and transfer those over to a new console.

Once content is transferred from PlayStation®4 to PlayStation®5 or Xbox One to Xbox Series X|S, that content on Gen4 will be converted to untradable for security reasons.

Any coins and items remaining in your collection will be given a similar value in Tradeable Packs to start on your new generation account.

This one-time content migration will be available on a November 8th update.

Currently planned as post-launch updates, cross-platform matchmaking across same-generation consoles for HUT and World of Chel will shorten queue times and create deeper player pools so you and your crew can test your mettle against more teams than ever.

A new series of desperation gameplay animations add a new layer of authenticity and excitement to the game.

Stumble Actions: Attempt a pass or shot after taking any level of contact. These desperation moves are the foundation of epic, highlight-reel moments and ensure you’re never out of play. And with over 500 Stumble Action animations, each moment feels just as exciting as the last.

Loose Puck Plays: Turn any loose puck into an opportunity by double-tapping pass or shoot to dive into incredible plays to score or clear the puck.

New X-Factor Animations: Trevor Zegras’ “Skilled Up” lets you recreate his viral flip pass over the net, and Sarah Nurse's “Relentless” increases the player’s ability to shoot and pass while off balance.

Gameplay strategies have been updated across the board to make it easier to understand and execute the best game plans for your desired playstyle. What’s on deck:

Player Roles on the Power Play: You can now assign these three different roles on their Power Play: Distributor, Finisher, and Puck carrier. Players with assigned roles will be known to the AI, and the AI will know to distribute the puck to them based on position, situation, and X-Factor tendencies.

New Instructional Videos: Carrlyn Bathe breaks down the intricacies of Penalty Kill and Power Play strategies in a series of new videos.

Stanley Cup Celly: A new interactive Stanley Cup celebration gives you additional agency when it’s time to recognize their big win in Franchise mode. Choose who hoists the cup first, etch your name into its side, and more.

Hattricks: The iconic hattrick hat throw returns, along with the ability for you to customize your team's hattrick celebrations.

Big-time Moments: A series of new game-ending animations for those high-adrenaline moments like come-from-behind, OT, shootout, and playoff game victories.

All new projections for game intros.

In a complete overhaul of crowd intelligence and audio, the folks in the stands now understand and react to what’s happening in the game. Thanks to our new Crowd Engagement Score algorithm, expect to be showered in cheers after winning a tense shootout and booed into the penalty box when you foul an opponent on their home ice.

Dynamic new on-ice AR leaderboards for all online and offline modes give live updates on player and team statistics as they move up the rankings. FROSTBITE ENGINE

Cross-Platform Matchmaking: Currently planned as a post-launch update, cross-platform matchmaking in HUT across same-generation consoles will speed up wait times and bring in even more teams for you and your squad to square up against.

HUT Rivals Rewards: Following feedback from our community, you can now unlock three additional tiers of rewards based on Win or Win Streaks, which will be granted immediately.

Historic Level of Customization: In a significant update to Franchise Mode, players can now customize their league in a multitude of new ways, including:

Set the number of games played from 6-84.

Set the number of divisions and conferences.

Set the number of division, conference, and inter-conference games.

Set the number of playoff and wildcard rounds.

Customize the number of playoff games in a series and round.

Control the number of home and away games for each playoff series.

This historic level of customization, along with roster sharing, allows players to model their leagues after their favorite years and seasons, from the Original Six to the high-flying ‘80s.

Cross-Platform Matchmaking: Currently planned for November 2022, cross-platform matchmaking in WOC across same-generation consoles will speed up wait times and bring in even more teams for you and your squad to scrap over the “dub” with.

Creation Zone Updates: Customize your team’s arena, celebrations, and on-ice projections with more control than ever before.