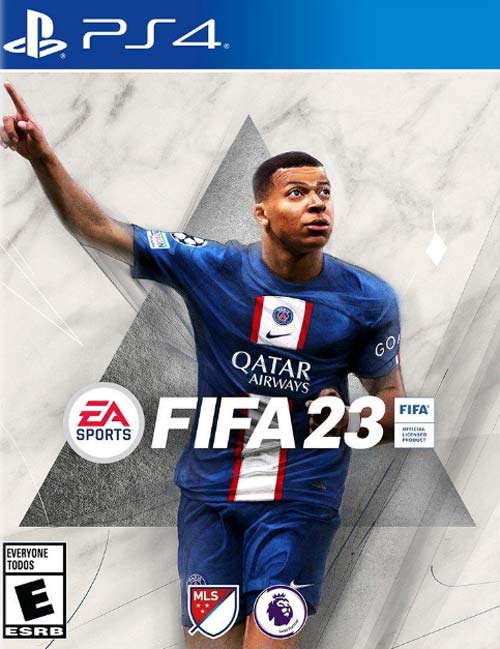 EA SPORTS™ FIFA 23 brings The World’s Game to the pitch, with both men’s and women’s FIFA World Cup™ tournaments, the addition of women’s club teams, cross-play features, and new ways to play your favorite modes.

EA SPORTS™ FIFA 23 brings even more of the action and realism of football to the pitch in The World’s Game. Play the biggest tournaments in football with both the men’s and women’s FIFA World Cup™ tournaments coming to FIFA 23 during the season, play as women’s club teams for the first time ever, plus enjoy cross-play features that make it easier to play against friends. Enjoy a new way to play and build your dream squad in FIFA Ultimate Team™ with FUT Moments and a revamped Chemistry system, or live out your football dreams in Career Mode as you define your personality as a player and manage as some of football’s most famous names. In VOLTA FOOTBALL and Pro Clubs, bring more personality to the pitch with new levels of customisation and enhanced street and stadium gameplay. However you play, experience The World’s Game with over 19,000 players, 700+ teams, 100+ stadiums, and over 30 leagues - including the UEFA Champions League, Premier League, new Barclays FA Women’s Super League and France D1 Arkema with unrivalled authenticity in FIFA 23.

Power Shots - A new skill-based, risk versus reward shooting mechanic brings football’s most powerful and impressive shots into the game. Create space away from defenders, pick your spot and trigger a power shot to add additional power to your strike and a chance of the spectacular.

Redesigned Set Pieces - A set piece redesign gives you more control over free kicks, penalties and corners, allowing you to choose where you make contact on the ball to change direction, trajectory, curl, and more. Plus an update to camera positions on corners better reflects the drama of dead ball situations.

Net Interaction Physics - New net physics reacts to the motion of players, responding to individual limbs and creating more natural interactions with the net as players run, slide, or fall into the goal.

Player Awareness - A new collision prediction system enhances players’ awareness on the pitch, allowing them to move intelligently to avoid tackles and collisions.

Defending - Hard clearance slide tackles, physical tackles, and even backheel tackles give you more ways to defend against oncoming attackers.

A new coaching system helps introduce new and less experienced players to the fundamentals of gameplay, with a series of chapters to help you improve your game.

Pick between the two FIFA 23 cover stars as you decide between Sam Kerr and Kylian Mbappй as your coach, then hone your skills with recommended skill games to explore, including notes from your coach based on your performance and in-depth skill explanations that help you take your game to the next level.

Experience the pinnacle of both men’s and women’s international football in FIFA 23 with the men’s FIFA World Cup Qatar 2022™ and FIFA Women’s World Cup Australia and New Zealand 2023™*.

*more information on the FIFA Women’s World Cup Australia and New Zealand 2023™ to follow in the build-up to the tournament.

Play as women’s club teams for the first time in EA SPORTS FIFA history as the Barclays FA Women’s Super League and Division 1 Arkema come to FIFA 23 at launch. Plus, enjoy dedicated HyperMotion2 capture that powers the women’s game in FIFA 23 to make female players move authentically in FIFA 23.

Play together against friends on different platforms as FIFA 23 introduces cross-play for players on the same platform generation.

Connect with friends and play in 1v1 modes, including Online Friendlies, and in FIFA Ultimate Team™ in FUT Play A Friend. Plus, compete against players on different platforms in Online Seasons, FUT Online Friendlies, FUT Rivals, FUT Champions, and FUT Online Draft to help you to get into your next online match more easily than ever before.

Build your dream squad and compete in the most popular mode in FIFA, with thousands of players to add to your team and countless ways to customize your Club on and off the pitch. Whether you want to play on your own in Squad Battles, together in FUT Co-Op, Online in Division Rivals, or against the best in FUT Champions, FIFA Ultimate Team™ (FUT) connects you to the world of football throughout the entire season with a range of content influenced by real-world performances and competitions including the UEFA Champions League, UEFA Europa League, and CONMEBOL Libertadores.

FUT 23 brings you a brand new mode with scenario-based FUT Moments, redefines the Chemistry system to provide more squad building flexibility, makes it easier to play with friends and find your next match with cross-play, and more.

Define your personality and your matchday as you live out your football dreams in FIFA 23 Career Mode, with an authentic experience of some of football’s biggest tournaments and leagues including the UEFA Champions League and UEFA Europa League, CONMEBOL Libertadores, Premier League, Bundesliga, LaLiga Santander, and many more.

Experience unrivalled authenticity in FIFA 23 with the most true-to-life experience of The World’s Game featuring football’s biggest stars and teams, including 19,000+ players across 700+ teams in over 100 stadiums and over 30 leagues. FIFA 23 is the only place you can play the iconic UEFA Champions League, UEFA Europa League, UEFA Europa Conference League, CONMEBOL Libertadores, CONMEBOL Sudamericana, Premier League, Bundesliga, and LaLiga Santander in the same game, along with the Barclays FA Women’s Super League, France D1 Arkema for the first time ever.