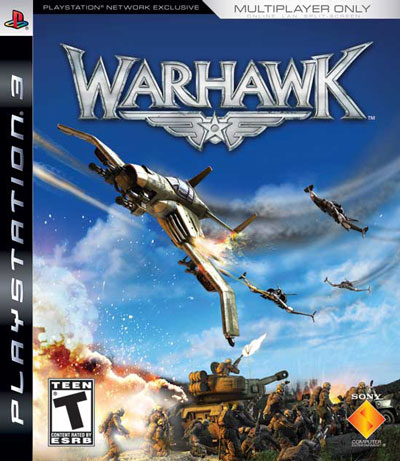 The long-awaited remake to the PlayStation hit takes flight on the PLAYSTATION3 (PS3) computer entertainment system. In Warhawk, players experience the thrill of white-knuckle aerial combat with swarms of enemy fighters, bone-crunching armored assaults and high-intensity infantry combat in a massive, all-out war fought both on the ground and in the skies.

Warhawk delivers high definition warfare and multi-modal combat exclusively through online gaming, allowing players to battle against and alongside the Warhawk online community. Through various gameplay modes such as Team Deathmatch, Territories Mode and Capture the Flag, players engage in cooperative online play or fend for themselves against a barrage of enemies in thrilling combat.

During battle, players can take command of the most advanced war machine in the fleet, the Warhawk, capable of aerobatic dogfights at high speeds or hovering over ground troops providing tactical support. Players continue the battle on foot with an arsenal of weaponry including rifles, flame throwers, grenades and more. Furthermore, players can gain access to an array of ground vehicles and lay waste with powerful weapons mounted on jeeps, tanks and specialty transports.

The stunning graphics and power of PS3 sets the stage for a truly unique Warhawk universe filled with detailed on-screen vehicles and troops, captivating and interactive landscapes, destructible cities, and vibrantly detailed environments.