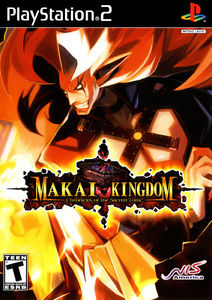 An attempt to rewrite history gone terribly wrong, Lord Zetta the ruler of netherworld brought destruction upon himself. When all seemed lost, three evil overlords appear before Lord Zetta to help him recreate his world. Now Lord Zetta wages war on a new world to become the supreme ruler once again, while the three overlords entertain themselves by creating more trouble for Lord Zetta.

Players will take on the role of Lord Zetta to command an army of determined fighters to reclaim what has righteously been his, the netherworld. Gamers will battle enemies ranging from vicious demons to determined soldiers with both modern and ancient warfare. Slash your enemies with the good old broadsword or blast your way through with the deadly rocket launcher; the choices are yours.

Makai Kingdom introduces a new summoning system referred to as the INVITE system that summons your facilities that contain army units to the battlefield. Every facility summoned to the battlefield will contain your troops that are then deployed to battle your hated enemies.

In Makai Kingdom, battle maps are randomly generated, offering a new gaming experience every time you play. With unlimited variations of maps, gamers can expect countless hours of game play.