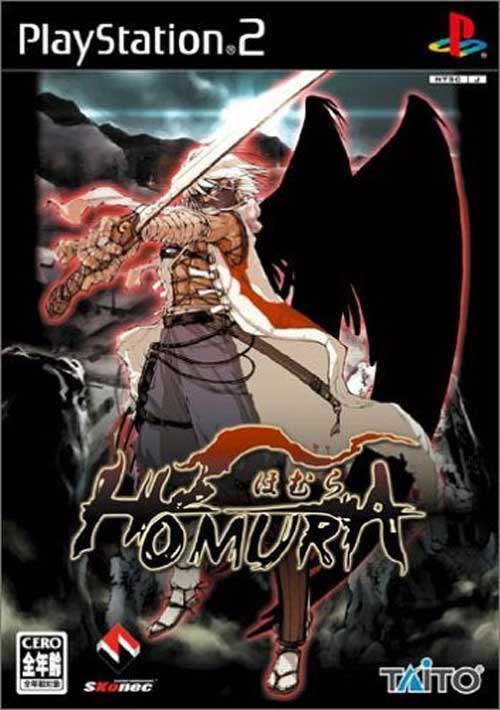 An evil fallen angel steals the Divine Crystal, one of Heaven's untouchable treasures. With this crystal he gains the power to control the thoughts of Shogun Ieyasu Tokugawa, and forces him to occupy Osaka castle and put himself in power using his newfound powers. In Heaven, the leaders of the individual heavenly families form a council with one aim... to regain the Divine Crystal. But they can't do this alone, so they decide to use the prisoner Homura to aid them. While they don't want to release him, he is the only one who's blood is half that of an angel and half human making him immune against the Crystal's powers. Homura refuses at first, but when he finds out that his mother was one of the victims at Osaka he picks up his sword and is ready to fight once again...

Homura is a top-down shoot'em up of the bullet-hell persuasion. The player takes on the role of Homura as he fights his way through 4 levels filled with demons. Each stage has a branching path where Homura can pick which route to take. The paths will meet up at the end of the stage however, so the boss fight will always be the same.

There are several ways to dispose of the enemies in the game, where the common one is a projectile attack (as it the norm of the genre). What sets this game apart is Homura's sword slash technique; When used it makes the enemies' bullets bounce back towards them. The more bullets are slashed at once, the higher the score multiplier will be. The sword slash has to be recharged for a few seconds each time after use. There are also powerful special attacks which will clear the screen of all enemies or do massive damage to bosses.

What does "Complete" mean?
The buy and sell value of Homura (Playstation 2) is based on how "complete" it is. When in the "complete" condition this used Playstation 2 game includes: