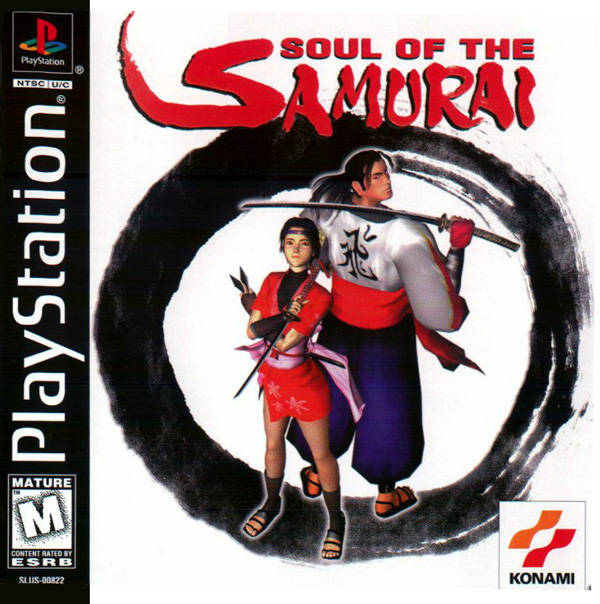 The complete condition of pre-owned Soul of the Samurai includes Manual, Box

Soul of the Samurai (PlayStation Games)

Claim your destiny as a proud warrior and honor your ancestors in Soul of the Samurai for Sony's PlayStation.

It's the end of the ~Edo Period in Old ~Japan and forces are plotting against the ~Shogunate. The most powerful of the ~Shogun's lieutenant's, Kizumi Danmasa, has made a pact with a demon to destroy him and seize control. But the forces of light are already moving against Kizumi. On the side of good, but unknowing of his role, is the samurai, Kotaro Hiba, who has returned to the village of his youth to visit his parents' grave.

Things have changed, people are wary of him and his parents' grave has been ransacked. All roads seem to lead to Kizumi's castle. The story really begins when you find a young woman being attacked by unruly guards and intervene on her behalf.

Enter Lin of Sekirei, ~Bakafu spy. After a quick scuffle with the crazed town guards, you exchange remarks and head your separate ways. This will not be the final meeting between you two...

Now you can take the role of either Kotaro Hiba or Lin and set out on your quest. Each character will have different tasks and objectives to do, but their way lies together. They will meet up several times and exchange information and hints. Each character also fights with their own unique style and weapon.

The deadly ronin, Kotaro Hiba, uses his long samurai sword and slick techniques to take out foes. The sleek Lin uses her agility, kicks and throwing knives to demolish enemies of any size. You will have to learn all the skills necessary to become a true master of each character and fulfill your destiny.

Many weapons and items will need to be collected throughout the journey in order to be successful. New swords and knives can be purchased from blacksmiths and armories so that your hero can be fully equipped. Whether it be a flaming ~Doujikiri sword, the basic ~Denta blade or a simple ~Shurkien thrown by Lin, each weapon is necessary to defeat enemies you will encounter. Don't forget to keep collecting healing herbs and ointment, as your battles will leave you scarred and weary.

What does "Complete" mean?
The buy and sell value of Soul of the Samurai (PlayStation) is based on how "complete" it is. When in the complete" condition this used PlayStation game includes: