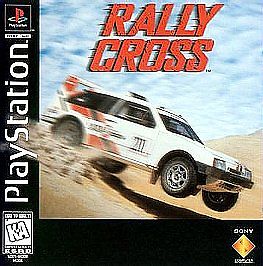 A chaotic, and bouncy rally racing game. One of the aspects of this game that set it aside from other games at this time was the variety of the terrain. Not only is it off-road, but the course is filled with jumps, dips, hairpins, and off camber turns. Consequently, it is very common for the car to flip upside down. By pressing the shoulder buttons, the player can rock the car left or right. To get back on the tires, the user must time the rocking of the car to flip it back upright.

Any of the course can be raced forwards or backwards, and there is a season mode as well as the single race mode. In order to increase the chaos, there is a suicide-mode where you race the course in the opposite direction of the other cars. Up to 4 players can play the game in split screen mode. Tracks include a tight Stadium course, an abandoned mine, jungle, and desert.

One trick to increase performance is that the buttons that rock the car upright, can also be used to prevent flipping in tight corners. Mud, dirt, snow, and water are kicked up behind the car to add some graphical flair. The cars in the game are not licensed vehicles.

What does "Complete" mean?
The buy and sell value of Rally Cross (PlayStation) is based on how "complete" it is. When in the "complete" condition this