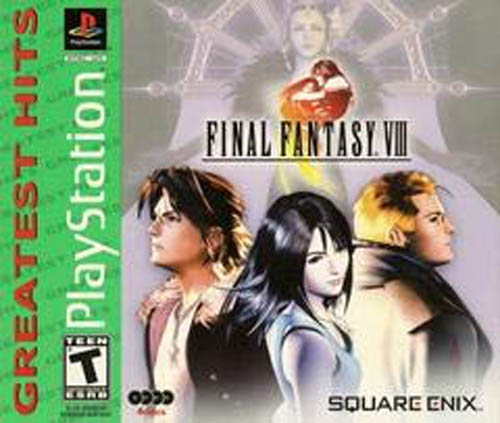 The 'Greatest Hits' version of this product is only cosmetically different from the 'Black Label' version.

The eighth installment in the classic series took the series in a new direction. Following the success of Final Fantasy 7, Final Fantasy 8 instantly became one of the most hyped games ever, selling well over ten million copies worldwide. In a time of both sophisticated technology and powerful magic, an evil sorceress corrupts the world's largest military power through manipulation and deception, enslaving mankind to do her bidding. Her goal is not something as simple as world domination; but to completely conquer all of space and time. To counter the turn of events, various leaders head combat training schools, known as Gardens, that turn out elite fighting forces. Known as SeeDs, they defend, serve, and protect humankind from the sorceress. The sole purpose of these academies is to vanquish the sorceress and save humanity as we know it, although they take many other assignments for the right price.

A small, loose-knit group of SeeD graduates find themselves wrapped in a much bigger endeavor than simple military combat. Now, a gunblade specialist, together with a diverse group of young heroes, must set aside his fears, face the emotions he's run from, and become the leader that he never wanted to be.