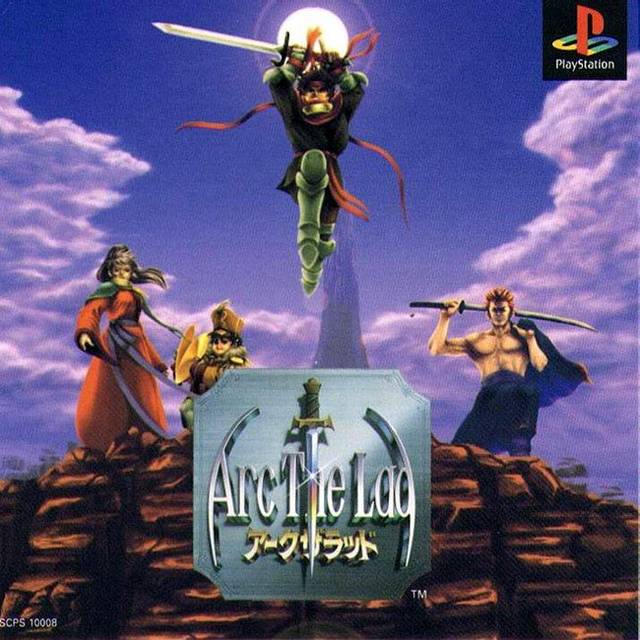 Not compatible with US Playstation system. Read more here.

Arc the Lad begins a three-part journey through a magical world on the edge of destruction and populated by a unique cast of role-playing characters, each with specific weapons, attributes, and agendas. Characters are defined through more than a dozen changing elements including range, hit points, magic points, attack and defense levels, magic capacity, agility, experience, jump and throw abilities, counterattack prowess, and the ability to catch thrown items.

Action is controlled through three main areas: Events, Maps, and Battles. Characters can encounter seven different conditions during battle that affect their status, including poison, paralysis, sleep, darkness, silence, and stone, or can lose abilities and strength if they become "Hemo-ji." Battles are fought in enclosed environments, but each controlled character can move freely within the grid-based landscape, employing melee or ranged weapons.

Featured individuals in Arc the Lad include Arc, a well-balanced fighter searching for his father, Kukuru, protector of the sacred flame, and Poco, a marching band member whose instruments play an important part in protecting party members during battle. Tosh, an Elite Guard defying orders by defending the innocent victims of Palencia, Gogen, one of the seven original heroes with an arsenal of mystical powers and spells, and Iga, a monk and master of Kenpo sworn to protect the secret scrolls of the Amaidar Temple, complete the roster. Unexpected help comes from Chongara, a merchant adventurer with access to special attacks and summoning abilities.

Other features include multiple save slots on the PlayStation memory card, access to Chongara's Monster Book with information about statistics, abilities, losses, wins, and items carried, and game options for message speed, dual-shock controller vibration, battle voices, sound, and help.

What does "Complete" mean?
The buy and sell value of Arc The Lad (PlayStation) is based on how "complete" it is. When in the "complete" condition this used PlayStation game includes: