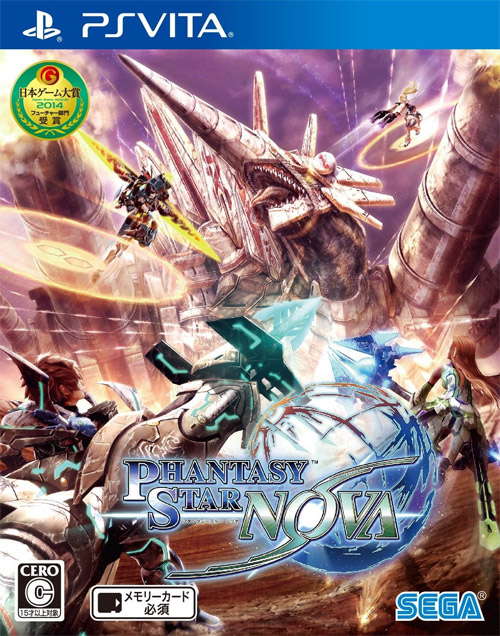 Phantasy Star Nova is compatible with all domestic and international PlayStation Vita systems.

The Vita-exclusive Phantasy Star Nova is coming out soon! First announced at TGS it looks like we've got ourselves another top-notch Vita title to add to the already jam-packed month of November!

Phantasy Star Nova will be set in the same world as Phantasy Star Online 2 but will drop many of the online elements and take on a much more single player approach. If the idea of playing without your friends sounds horrifying, the game will include 4-player co-cop play.

The title takes place on Planet Machia, a planet where 'Photon' energy is useless. Without the ability to recover energy or upgrade your weapons, players must take survival into their own hands, exploring the planet of Machia and unlocking the secrets it has to offer.

The creatures inhabiting Machia are giant beasts appropriately named 'Gigantes.' In order to take these massive brutes down, you'll need to find and hit their weak spots together with your allies.

Sega also implemented tweaks based off the Phantasy Star Nova battle demo into the game. After the first demo, tri-Ace increased character movement speed by 1.4x, reduced input delay, fixed issues with locking on to enemies, and fine tuned the speed of the camera, among other improvements.

First-print bonuses will be included in-box consisting of three different DLC codes. The first includes costumes for Phantasy Star Nova. The second code can be given to a friend to purchase the digital version for 30% off. The third is an item code for costumes in Phantasy Star Online 2.