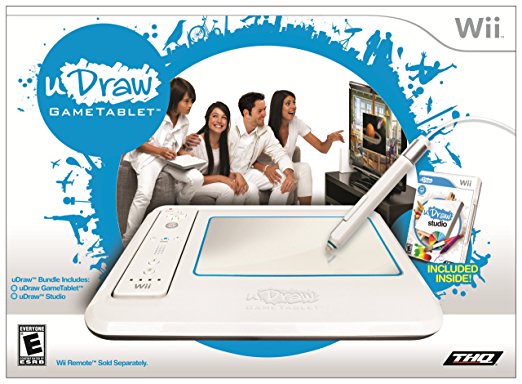 The uDraw GameTablet is a new way for players of all ages to interact with each other and their Wiis as they explore their creative sides. A wireless tablet with a tethered stylus and a 6" x 4" drawing area, the uDraw GameTablet integrates the Wii Remote into its design, taking advantage of the controller's motion control capabilities and button scheme, as well as drawing power from it. Bundled with the drawing game uDraw Studio, players can explore a slew of drawing, coloring and sketching modes which accommodate various levels of artistic ability and then save and share their work with others. Developed by THQ, the uDraw GameTablet will also be supported by a series of upcoming games, including Pictionary, in which it serves as the drawing pad and the platformer Dood's Big Adventure, which allows for on-the-fly customization of the game environment and hero.

Connect with your Nintendo Wii like never before with the uDraw GameTablet. A wireless sketch tablet with tethered stylus developed by THQ, the uDraw GameTablet allows players to draw, paint, sketch and more as it builds upon the innovative wireless functionality of the motion-sensing Wii Remote controller by integrating a removable Wii Remote (sold separately) directly into the tablet design. This integration opens up entirely new gameplay and input options by allowing the uDraw GameTablet to track your drawing movements more accurately than ever thought possible, while still allowing easy access to Wii Remote buttons. This integration also allows the tablet to draw just enough energy to power itself from the Wii Remote, meaning less batteries to change and zero battery drain when the tablet is disconnected and not in use. In addition, added sensors in the tablet make the Wii Remote respond even quicker to the slightest movement, motion, or twist of the wrist, while the interactive pen enables you to intuitively connect with your television and games utilizing pressure and tilt-sensitive technology.

The uDraw Game tablet comes bundled with uDraw Studio. Through this software/accessory combination users can paint, draw, sketch and color to their heart's content utilizing nine different media options, and saving and sharing finished work via the Wii's SD card memory functionality. This combination can also be used as a teaching tool as users take advantage of Replay Mode to explore creations and art techniques on a stroke-by-stroke basis. In addition to uDraw Studio, the uDraw Game tablet will also be compatible with a continuing flow of releases. Some will be similar to the artistic bent of uDraw Studio, while others will utilize the tablets unique input capabilities into the games themselves. These include the upcoming Pictionary, which will have players using the tablet to draw clues for other players, and Dood's Big Adventure which will allow for character design and sketched customization via the tablet.